Winter moth eggs started hatching in southern New England around April 19. Since then winter moth caterpillars have been feeding on apple, pear, and blueberry flower buds and leaves, and leaves of maples, oaks, beech, elms, birch, cherry and other trees and shrubs. Winter moth caterpillars will continue to feed for another 7-10 days and then drop to the ground to form cocoons. Winter moths will stay underground as cocoons until November and then emerge as moths. Male moths fly in November and December, while female moths are rarely seen. Female moths are wingless and can’t fly. Female moths climb up trees and lay eggs on tree trunks and branches.

If you are going to apply an insecticide be sure not to spray any plants that are blooming. Insecticides applied to flowers will kill bees. Spinosad or Neem products are the safest insecticides to use now. And remember, winter moth caterpillars will soon be gone without spraying.

In late October, it may be helpful to set up tree wraps to capture female winter moths as they climb up trees to lay eggs. It is unknown if tree wraps can effectively control winter moths, but it may be worth trying. Tree wraps will not be effective set up on a few trees in wooded areas or on trees close to wooded areas.

In collaboration with the University of Massachusetts, URI has released a parasitic fly that attacks only winter moth caterpillars. The fly, Cyzenis albicans, has successfully controlled winter moth outbreaks in Nova Scotia in the 1950’s and the Pacific Northwest in the 1970’s. Parasitic flies have been released in Massachusetts since 2006 and in Rhode Island since 2011. Flies were released in Warwick in 2011, Bristol and Jamestown in 2013, Cumberland and Kingston in 2014, and Lincoln and Little Compton in 2015. In Massachusetts, some of the early release sites are seeing winter moth populations decline due to high rates of parasitism. In Rhode Island, parasitic flies were recovered at Goddard Park in 2014. In a few years we hope to start seeing winter moth populations decline due to Cyzenis albicans. 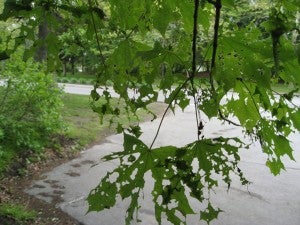 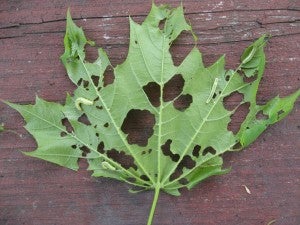 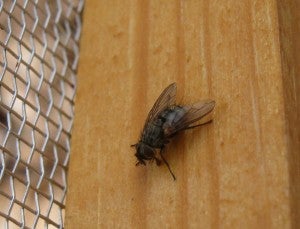