Minority students are underrepresented in the field of marine biology and other natural sciences.  An obvious reason for this situation is the socioeconomic background of different groups of students and lack of exposure to natural science-related programs that other students so commonly have opportunities to explore.  Awareness about, access to, and participation in such programs by underrepresented students all lag far behind those of other demographics. The rarity of such programs designated specifically for minority students also contributes to a lack of diversity among student participants in these types of programs, is directly related to the small number of minority students that major in natural sciences in college, that obtain post-graduate degrees in such fields, that graduate from college and that pursue careers in these areas.  Ultimately, underrepresentation in these fields and the associated disproportionately low involvement of minorities in environmental issues has contributed to chronic and widespread environmental injustice experienced by underrepresented groups that has persisted for decades in the USA. 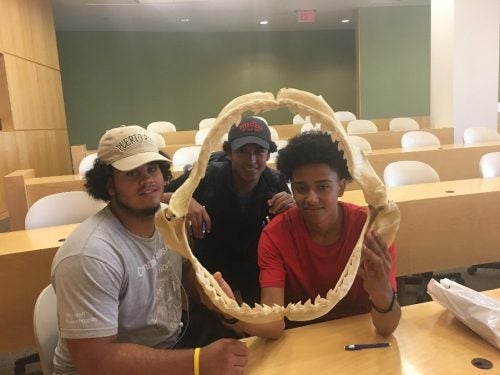 The Department of Biological Sciences and College of the Environment and Life Sciences at the University of Rhode Island has established URI Shark Camp to provide underrepresented high school students with an opportunity to participate in a week of fieldwork, fishing for sharks and to walk them through the steps of finding a college program of interest and applying to a college that they would like to attend.  During the spring students return to URI for a one-day event following up on their shark camp experience and to further assist in the college application process. URI Shark Camp will provide opportunities for minority high school students that are available at few other institutions anywhere in the world.

Office of the Provost