Monument Valley is approximately 1,100 square miles in the four corners region on the Utah-Arizona state line.   (Baker 1936)  Through the valley you can see buttes rising sometimes 1,000 of feet from the ground. These buttes are also known as monuments giving the valley its name and making it a popular tourist attraction.   The rocks found in the valley are mainly sedimentary, ranging from the Permian to the mid-Jurassic.  The three main formations that form the monuments are the Organ Rock Formation, De Chelly Formation and the Moenkopi Formation (Blakey 1987).  These monuments seen today are the products of millions of years of erosion. (Navajo Nation).   In addition to the Sedimentary rocks found here there are several locations where Igneous rocks crop out.  All the Igneous rock here are seen in the form of volcanic “plugs” in dike intrusions.  The dikes were thought to have intruded between Tertiary to upper Triassic (Gregory 1917) and by chance have also weathered into monument-style structures.

Monument valley is an exceptional place to study the Geologic history of the Colorado Plateau.  Exposed within the valley are rocks ranging from as old as the Pennsylvanian all the way up to the Jurassic, about 192 million years in Earth’s history (Blakey 1987).  The oldest rocks found in the Park tell us that the valley was once a marine environment. Moving upward in the strata we find that it will not be the last time this area would be dominated by a marine setting.  Throughout its history Monument Valley has seen seas come and go with relative frequency.  When not covered by shallow seas the area was occupied by large deserts or river systems.  In more recent times there has been volcanic activity resulting in the dikes. The dikes are heavily eroded and the plugs are the only remaining volcanic structures.

In Monument Valley, there are ten major formations present throughout the park. They include the Halgaito, Cedar Mesa, Organ Rock, De Shelly, Moenkopi, Owl Rock, Chinle, Wingate, Kayenta and Navajo Formations. The three major formations that make up the monuments themselves are the Organ Rock Formation, De Chelly Formation and the Moenkopi Formation.

The base of the monuments themselves are composed of Permian Organ Rock Shale.  It is nearly 700 ft thick Formation (National Park Service, 2014). This shale layer was deposited by marine environments such as streams and tidal flats. This time of deposition led to the creation of dark brown and red mudstones and siltstones. Since this a shale layer, it erodes into a low, eastward, sloping angles.  The next layer that is on top of the Organ Rock Shale Formation is the Permian De Chelly Sandstone. This Formation is around 400 ft thick in most areas ( Blakey, 1987). This quartzose sandstone was created in an aeolian depositional time period, such as a desert. It was large enough to create large dunes which are represented by the cross stratification with the mesas. This Formation has been in erosional environment for nearly 50 million years and has caused the buttes and spires that are present today.  Throughout the park there are also white caps on top of the De Chelly Formation is the Moenkopi Formation.  This layer isn’t always visible in the park since it is easily eroded because it is a red sandstone and is stratigraphically younger than the rest of the rock formations.

A stratigraphic column of the Canyonlands National Park including the Formations present in the Monument Valley (Doelling, 2004).

Names and Meanings of the Monuments

Mitchell & Merrick Butte: Named for the two explorers who discovered silver within the Park.

Yei’bi’chei: Named for the Navajo spirtitual god and resembles a dancer emerging from a Hogan.

Bear and Rabbit: Resembles a bear and rabbit facing each other

King on his Throne: Resembles a king on his throne

Chosen as a unique, picturesque background especially in old western movies, Monument Valley has had scenes from several memorable movies filmed on location. Many famous actors are affiliated with the location such as Clint Eastwood and John Wayne (ICTMN, 2013). For more information on each movie, click the title and you will be directed to IMDb or the actual movie website.

Once Upon a Time in the West (1968) Director Sergio Leone

Back to the Future III (1990) Director Robert Zemeckis

The Return of the Navajo Boy (2000) Director Jeff Spitz

As we drove pass Monument Valley, it was as if we were in an old western movie. A dust storm was blowing thru on Rte 163 and you could barely make out the figures of the Monuments on the horizon. Tumbleweeds were blowing across the highway, and we were anticipating to see Cowboys and Indians ride up next to our caravan of vehicles. It made for a grand entrance into the ‘Wild West’. Just as we were coming up to the park entrance, a break in the storm allowed us to see the majestic ‘towers of rock’ consisting mainly of Organ Rock Shale, De Chelly Sandstone, and Moenkopi Sandstones. It was quite clear on how the early settlers and Native American’s gave the Monuments their names as the shapes of the Formations were made apparent. It was great being able to see a part of an iconic part of our country. 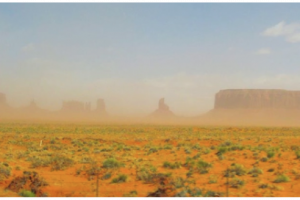 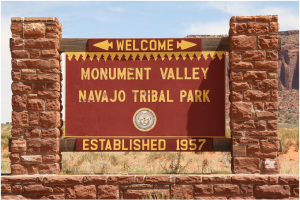 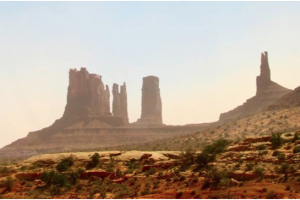 A photo taken from the car on Rte 163 of Monument Valley . Here you can seeCastle Rock, Bear and Rabbit, Stagecoach, and Big Indian(left to right). Photo taken from www.brianagrenier.yolasite.com Photographer Breezy Grenier 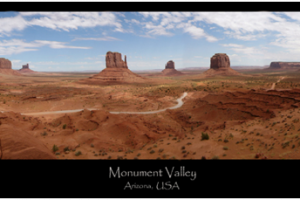 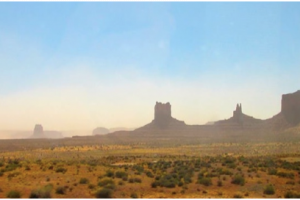 A photo taken from the car on U.S. Rte 163 looking east of Monument Valley, Valley of the Gods, during a dust storm. Photo taken from www.brianagrenier.yolasite.com Photographer Breezy Grenier 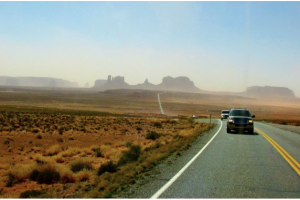 A photo taken from the car on U.S. Rte 163 looking south of Monument Valley, Valley of the Gods. Photo taken from www.brianagrenier.yolasite.com Photographer Breezy Grenier 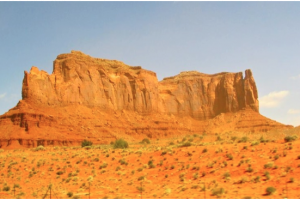 Witkind I. J. and Thaden, R. E., 1963, Geology and uranium-vandium deposits of the Monument            Valley area, Apache and Navajo Counties, Arizona, with sections on Serpentine and Garnet Ridge and mineralogy and paragenesis of that ore deposit at the Monument No. 2  and Cato Sells mines. U.S. Geological Survey. Bulletin 1103.