by Ryan Sullivan and Tucker Sylvia

Sunset Crater National Monument is situated at the southern edge of the Colorado Plateau near Flagstaff, AZ. Sunset Crater (elevation 2446 m) is the youngest basaltic cinder cone that is part of the much larger Neogene-Quaternary San Francisco Volcanic Field (SFVF). The SFVF is comprised of ~600 volcanoes and has been active for the past 6 million years (Duffield et. al., 2001). Most volcanism in SFVF is attributed to hotspot activity which has produced the numerous basaltic cinder cones similar to Sunset and Strawberry Craters, making up a majority of the small hills and resulting hummocky topography of the region. Sunset Crater is the youngest volcano in the field, which has been estimated to have erupted sometime between 1040 and 1100 AD, according to native legend (Smiley, 1959). In addition to these small volcanoes SFVF contains Arizona’s tallest mountain, San Francisco Peak (elevation 3851 m), a large stratovolcano complex which underwent a catastrophic eruption similar to that of Mt. St. Helens ~200,000 years ago (Hardy 2007).

~900 years ago the emergence of the hornito was witnessed by the ancestors of the today’s pueblo Native Americans. Today, the site is sacred ground to the Hopi Native Americans, who believe that the Hopi spirit (Kana’s Katsina) lives within the hornito. The area also features a series of lava tubes that are up to 25 feet deep. These tubes are sealed off to prevent the public from falling into them. The temperature in the lava tubes often stays below freezing year round, and ice can be found inside of them.  As the basaltic ʻAʻā lava weathers, it creates a volcanic soil rich in iron and other nutrients.

The trip to the San Francisco Volcanic Field began with a stop at the visitor’s center where some background knowledge was available on the general area. We then proceeded to the base of Sunset Crater where the basaltic flows could be seen, as well as the hornitos.  From there, the vans were taken a few miles down the road where we turned on to an access road for the high tension power lines that were carved through the area. The road led several miles across the landscape through a series of cinder cones. There were a few hills which I thought the two-wheel drive vans might have some trouble with, but there were more than enough people to push. When the vans stopped, the group climbed ~300 vertical feet to the top of, what we thought, was Strawberry Crater. The unconsolidated volcanic sediments were very loose under-foot, and getting to the top was somewhat strenuous, basically two steps forward one step back. Upon reaching the top, you could see several miles, and the actual Strawberry Crater, Sunset Crater, and the SF volcanic peaks were also within sight.  The view from the top of the cinder cone that we did hike was breathtaking. Coming down the slope was very fun if not exciting, skiing on rough glassy gravel. It would have been nice to see the features of the actual blown out Strawberry Crater up close, but this hike was well worth it. Although even the hike up this small hill was arduous and off roading a bit treacherous, this impromptu exploration of a new feature was very fun and rewarding. 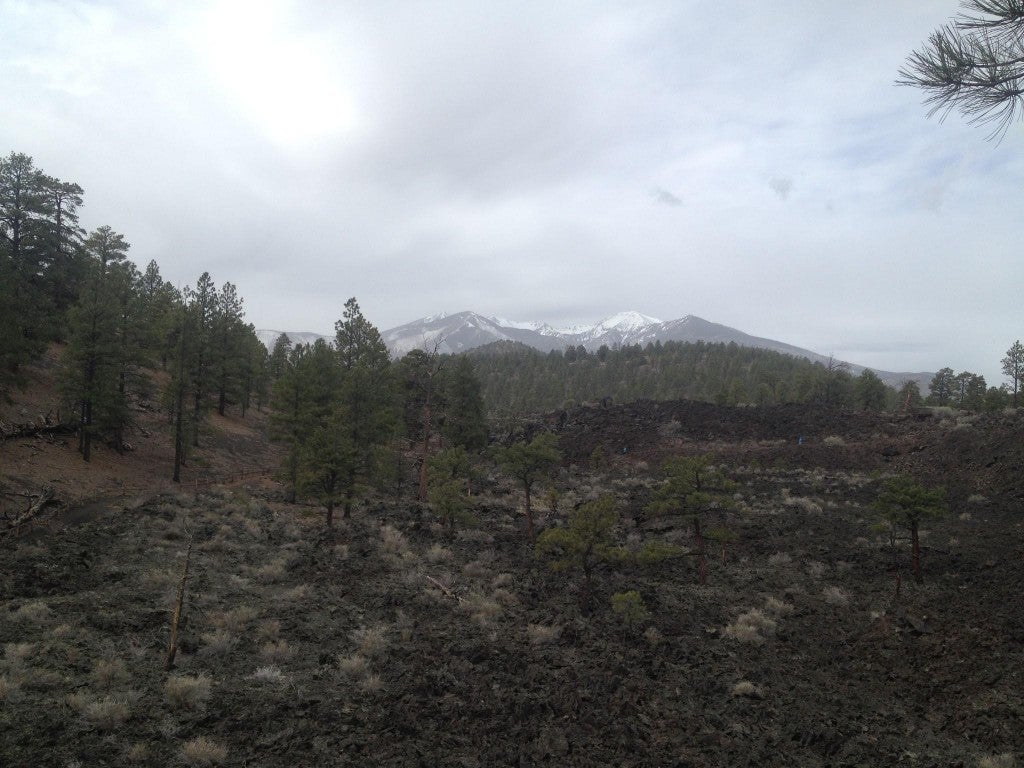 People on the hill add some sense of scale. 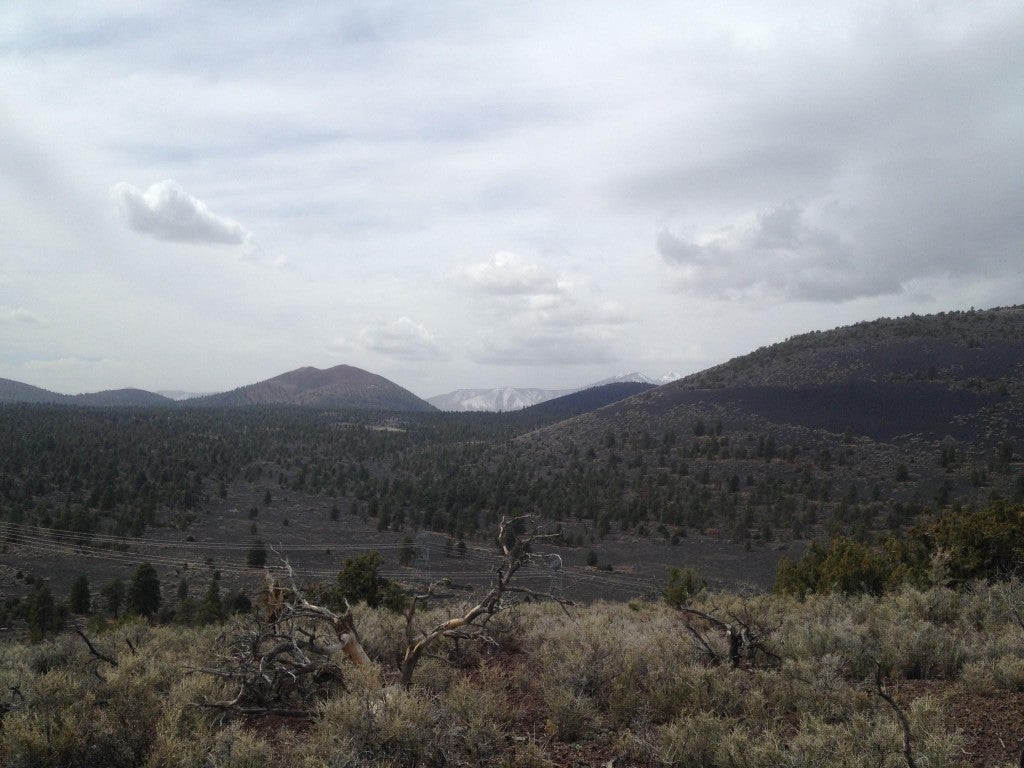 Looking back from the top of a small hill at the profile of Sunset Crater (left of center). 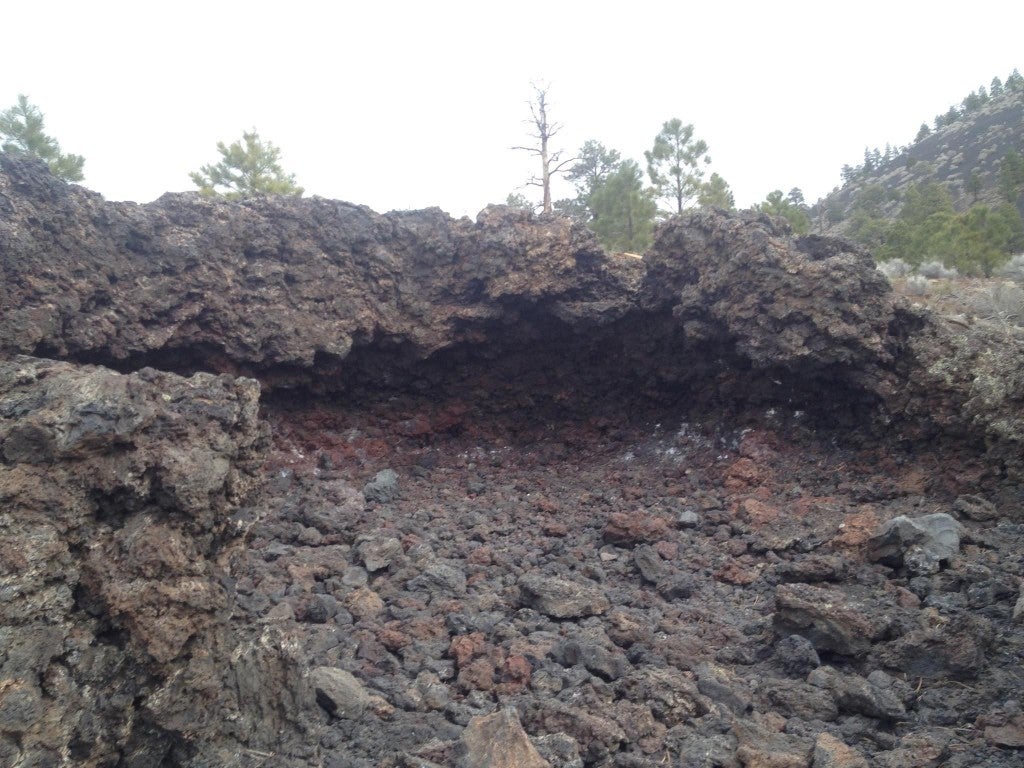 A Hornito in the lava field at Sunset Crater, cavity is ~1m in height. 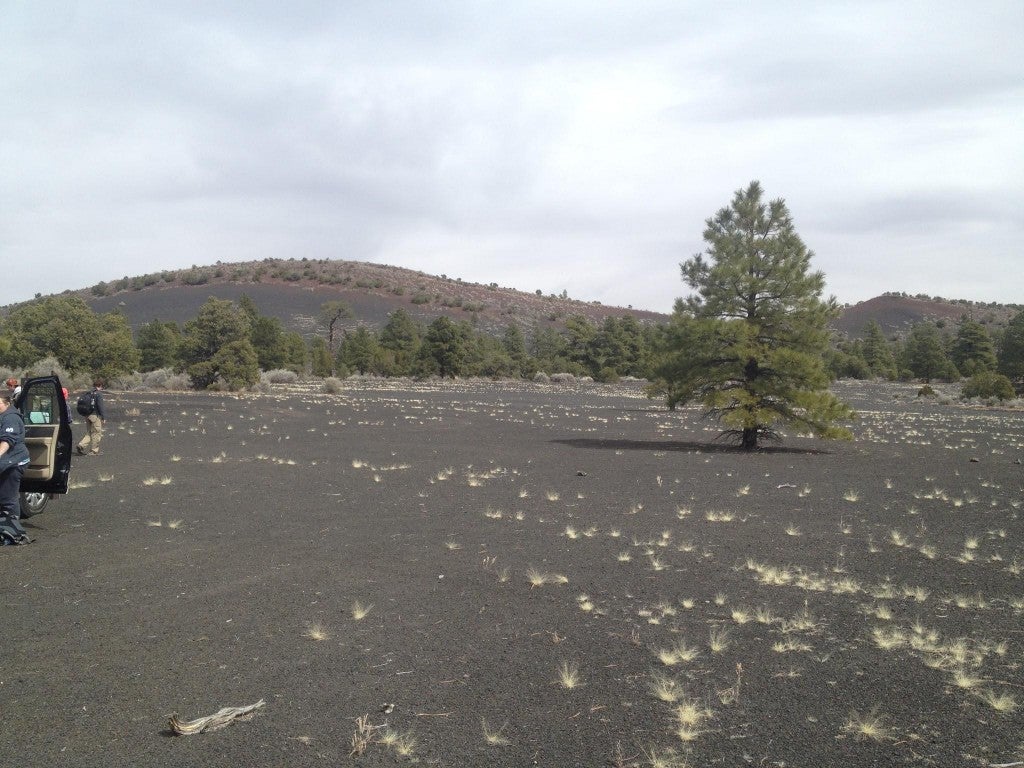 The unconsolidated slope we walked up to gain some perspective. 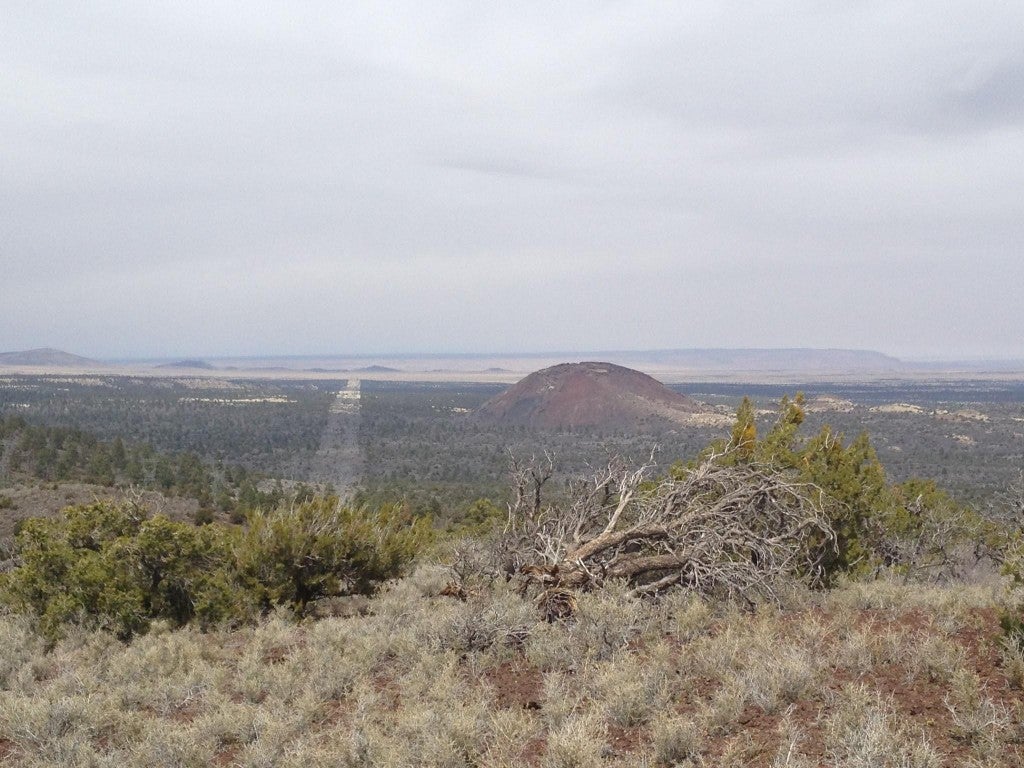