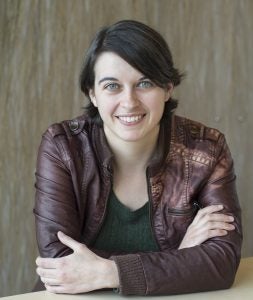 That’s the conclusion of Carrie McDonough, who will receive her doctorate in oceanography from the University of Rhode Island’s Graduate School of Oceanography this month.

During her five years at GSO, McDonough has distinguished herself by researching how chemicals in products we use every day, like shampoo, are contaminating waterways.

She came to GSO from the Massachusetts Institute of Technology—where she received her bachelor’s in chemistry—to work with Rainer Lohmann, an internationally recognized expert in marine pollutants.

McDonough had a successful run at GSO and will continue down that road at the Colorado School of Mines in Golden, Colo. In June, she’ll join the laboratory of Professor Chris Higgins in the Department of Civil and Environmental Engineering to study fluorinated pollutants.

“I’m excited to begin my new work,” says McDonough. “Fluorinated chemicals are a huge cause for concern now, especially because of their widespread contamination in drinking water supplies.”

Higgins is a leading expert in using advanced analytical equipment to measure highly fluorinated organic chemicals that, for more than 60 years, have been in rain-proofing materials and products such as nonstick coatings, like Teflon.

They were widely used in firefighting foams to combat fuel-based fires at airports and military fire-training areas, and now they have become persistent pollutants contaminating the country’s drinking water supplies, as was recently seen in Hoosick Falls, N.Y., and the Ohio River Valley.

It’s vital to measure organic pollutants in the environment. The chemicals have been linked to serious human health maladies, including kidney cancer and suppression of the immune system so the body cannot make antibodies correctly.

“There are still a lot of fluorinated chemicals in our environment, and in our bodies, that we know nothing about,” says McDonough. “We need to understand how these chemicals are transported and transformed in the environment, and what they do when they find their way into the human body.”

Science—particularly how humans alter the environment—has fascinated McDonough since Hathaway Brown School, a private all-female K-12 school in Cleveland, Ohio. After graduating from MIT, McDonough took a break from her studies to play rhythm guitar in a rock band and work as an environmental consultant in Massachusetts.

GSO was a perfect fit. McDonough studied two groups of compounds: flame retardants, which are added to furniture, electronics and plastic toys to decrease flammability; and synthetic fragrances, which are added to shampoo, soap, deodorant, detergent and cleaning supplies. These chemicals can end up polluting waterways if they break down and travel to fragile environments, like the Arctic.

During her research at GSO, McDonough used passive polyethylene, or sheets of plastic, to discover and then measure the contaminants in Lake Ontario and Lake Erie, as well as the North Atlantic and the Canadian Arctic.

McDonough’s results involving flame retardants are disturbing: She found that sizeable concentrations of the chemicals exist in remote ocean waters. It’s troubling, she says, that the chemicals end up in such a delicate environment like the Arctic, which can be easily thrown off balance.

At Colorado School of Mines, McDonough will learn how to identify and measure fluorinated chemicals. Hundreds of these chemicals are still not identified, which means little is known about their abundance in waterways or toxicity.

McDonough will use a high-resolution mass spectrometry to analyze the chemicals, and measure these chemicals in blood and tissues of mice to better understand what they do to living creatures.

Her work with Professor Lohmann, she says, prepared her for her next academic journey. It’s no surprise to McDonough’s colleagues that in March she won the C. Ellen Gonter Environmental Chemistry Award from the American Chemical Society, the highest honor given by the organization’s Division of Environmental Chemistry.

At GSO, McDonough also started a marine science blog, oceanbites, which writes about marine science with clarity and humor. She’ll continue the blog after she leaves GSO and also start another, envirobites.org, which will focus on environmental science research topics such as toxicology and urban pollution.

“I’ve had the opportunity at GSO to work with so many expert faculty who have expressed real interest in my work and helped me become an independent researcher,” says McDonough. “I’ve had a wonderful experience.”