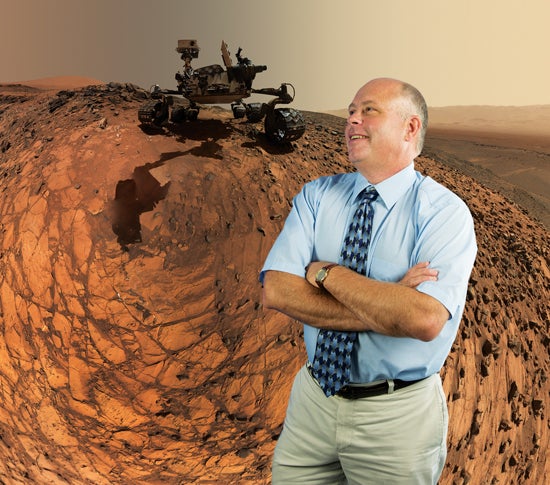 No science is more earthy than geology, but its pursuit has taken John Grant III to Mars.

Not in person, of course. But as one of the scientists involved in the day-to-day operations of NASA’s Mars rovers, he’s as close as anyone can currently get.

The whole thing started when Grant was doing graduate studies under the late, great URI geology professor Jon Boothroyd, who was famous for his work in coastal and environmental geology but “happened to be doing a small project on Mars” that year. It caught Grant’s attention, and since then, Grant has been focused on space.

That doesn’t mean Grant stopped studying the earth—deserts and sand dunes, river deposits and meteor craters all give insight into how meteor impacts and seasonal seeps of water have affected Mars’ surface. But his research means he’s also focused on the rovers as they explore and drill samples—or, in this photo, as Curiosity poses for a selfie at the “Buckskin” rock target on the 1,065th Martian day (or sol) of the rover’s mission. Perhaps it’s fitting that Grant’s favorite book is Ray Bradbury’s The Martian Chronicles, with its haunting tales of a decaying culture on Mars. After all, now that we know there is water on Mars, Grant wonders: “The big thing is that on earth, everywhere you find water, you find life. Does that hold true for Mars?”