Enter and you’ll find South American sweet potatoes and sunflowers and tomatillos indigenous to Mexico. Peruvian wild tomatoes and Cubanelle peppers share space with Mediterranean herbs, an African diaspora garden, and Caribbean crops. There are tomatoes hailing from Haiti and others from southern Italy. There’s a West Indian variety of tobacco not too far from the Asian leafy crops. This garden at 7 Thirty Acre Pond Road is a lush and diverse community where old and new world crops commingle, a living metaphor for the Columbian Exchange, the migration of plants, animals, and diseases from the old worlds, Europe, and Africa, to the new, the Americas. Beans, hardy expats, make an appearance in both Indigenous and Italian plots. This is an agrobiodiversity garden tended by John Taylor and his students, and it demonstrates how sustainable farming might reinforce community building in rural and urban communities.

“I’m interested in developing urban food systems that are sustainable in the fullest sense of the word.”

Agrobiodiversity is an aspect of agroecology, sustainable farming or agriculture based on the principles of ecology. Agroecology can characterize the agricultural approach of a 100-acre farm or the planning of an urban terrace garden. Taylor is particularly interested in urban food forests, gardens cultivated in cities for human food production. “I’m interested in developing urban food systems that are sustainable in the fullest sense of the word,” Taylor says. 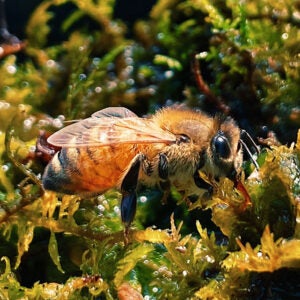 Our students explore the food chain, from farm to plate to waste and back, emphasizing sustainability, impacts on human health, and resilience from economic, environmental, and societal viewpoints.

While “food forest” might seem a relatively new term in the edible landscape conversation, the practice of agroecology is ancient.

“Agroecology has been defined as a science, a practice and a movement,” Taylor continues. “It’s a practice with roots in traditional and Indigenous agriculture and agricultural systems.” Agroecologists look to traditional systems such as Indigenous People’s planting of corn, squash, and beans together, plants colloquially known as the Three Sisters, for inspiration. Each plant benefits the other. By fixing nitrogen, the beans fertilize the soil for the corn and squash; corn stalks provide scaffolding for the beans to wind around, and the ground cover of squash leaves inhibits weeds.

“Traditional systems had to be circular in their metabolism so that they did not have to rely a lot on outside inputs. They’re self-supporting, like a natural ecosystem,” Taylor observes.

Urban food forests also produce more tight-knit communities, something Taylor wants to study further. “What really interests me are these smaller, more grassroots kinds of movements that are about more than just producing food. They’re about growing communities, too, and increasing the resilience of those communities.”

A means of combating racism

Urban agroforestry can be a means of combating environmental racism, Taylor notes. Many low-income urban neighborhoods are casualties of red-lining, the discriminatory practice of withholding services to low-income or culturally diverse neighborhoods on the grounds that such areas are hazardous business investments. It is not uncommon that such neighborhoods are also both urban heat islands and so-called food deserts, terms describing metropolitan areas hotter for human activity and lacking access to fresh, affordable food. “And there are also the recreational opportunities provided by urban greenery. And the psychological restoration,” Taylor says.

“The idea that just viewing greenery outside of your window can help to restore people psychologically,” Taylor says. “And then if you’re able to weave more natural areas into residential neighborhoods so that people can experience nature on a daily basis that restoration occurs when they interact with plants and other people.”

Whether you live in a city, suburb, or country, there are simple things you can do to better care for the planet and each other, Taylor says.

“Reduce food waste by composting. Grow your own food — even if you start with a windowsill garden in your apartment or the local community garden plot. Plant a tree,” he adds. “Engaging with plants, psychological restoration, building community: they’re all good things.”