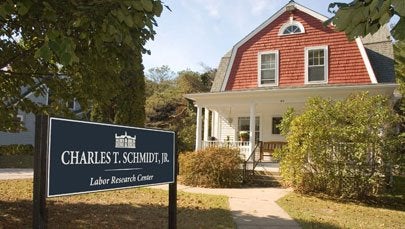 Founded in 1984, the Charles T. Schmidt Jr. Labor Research Center (SLRC) at University of Rhode Island serves as a regional hub for education, research, and outreach on employment relations and human resources management.

Since its establishment, SLRC has been a beacon of employment relations expertise in Rhode Island, New England, and the nation. The Center has received accolades for its work from the United States Senate and Progreso Latino Inc., and its projects and research have been funded by the Federal Mediation and Conciliation Service, National Institute for Occupational Safety and Health, the National Academy of Arbitrators, Rhode Island Department of Labor and Training, Rhode Island Department of Human Services, and the Electrical Contracting Foundation.

Beginning with its Founding Director Charles T. Schmidt Jr., SLRC directors have been recognized thought leaders and experts in areas such as industrial relations, human resource management, labor and employment law, dispute resolution, and labor economics. These leaders include:

To connect with the SLRC directly: