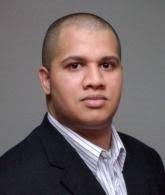 Dr. Dioscaris Garcia (SURF → PhD → SURF Mentor) was a recipient of the DiMaio Scholarship (2001) and USDA’s Opportunity Scholarship (2002) when he was an undergraduate at URI. He was one of the first recipients of a full-tuition scholarship to URI through the U.S. Department of Agriculture’s Multicultural Scholars Program. “That scholarship was the driving force in my academic life.” In 2003, he got one of his first experiences in an academic research laboratory via the RI-INBRE SURF Program, where he worked in Dr. David Rowley’s laboratory. Dr. Garcia graduated from URI in 2004 with a BS in microbiology and a minor in chemistry. He then earned his doctorate in molecular pharmacology at Brown University and received recognition for his leadership, dedication to teaching, and his research work in the characterization of the sigma-2 receptor. Dr. Garcia is currently an assistant professor of orthopaedics (research) at the Warren Alpert Medical School of Brown University, Departments of Molecular Pharmacology, Physiology, and Biotechnology, at Brown University.  He also serves as the co-director of the Diane N. Weiss Center for Orthopaedic Trauma Research at Rhode Island Hospital.  Dr. Garcia’s current research specializes in cell signaling and infectious diseases. In 2017 Dio came full circle, serving as a mentor for a student in the RI-INBRE SURF Program.