Joseph Goodwill, an assistant professor of civil and environmental engineering at the University of Rhode Island, researches water treatment methods designed to improve water quality when affected by extreme events such as a pandemic or hurricane. Goodwill’s solution: an antifragile approach to water treatment; that is, technology that actually improves water’s performance under volatile conditions.

To illustrate: If you were going to send someone a mug, you would wrap it in bubble wrap and place it in a box, maybe write “Fragile” on it to lessen potential damage from the stress the mug would undergo in the shipping process. This is making it more resilient, which is not a bad thing. But what if you could do something to the mug itself to make it better as a result of being dropped or shaken, Goodwill asks? That’s making it antifragile. “Now it’s obviously difficult to imagine a mug like that,” Goodwill says, “but we could imagine it from a material science standpoint, looking at materials that get better when stressed.

“We’re no longer in a position to use water once and discharge it. What worked for the last 100 years isn’t going to work for the next 100.”

“We do this with steel. When we strain a piece of steel — put some stress on it to bend it — by bending the beam, there’s actually an increase in the amount of load it can handle. So it gets stronger by stressing it.”

“Antifragility is a paradigm that could apply to all sorts of water treatment technologies or water system designs,” says Goodwill. “The hope is professors and researchers might find ways to apply it to their local systems.”

Goodwill’s work has attracted international attention. He was nominated for an Emerging Investigator Award from the Royal Society of Chemistry. The award recognizes researchers whose work has the potential to influence water research and technology. 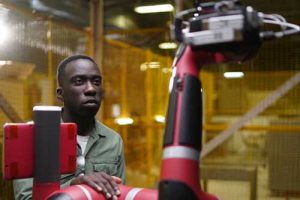 Goodwill’s expertise also was requested by the Providence Water Supply Board at the beginning of the pandemic when the city’s water tanks registered unsafe levels of trihalomethane, a chemical formed when natural organic material, such as decayed vegetation, reacts with chlorine in the water treatment process. Goodwill and his students were measuring one tank’s trihalomethane levels. “We were doing this real-world experiment where we were seeing the impact a global pandemic had on this very specific component of our water system.”

When Providence shut down due a shelter-in-place order, the trihalomethane levels grew, a potentially dangerous development as some TMHs can be carcinogenic.

“Providence had the tools in place to deal with this, so we tracked the utilization of these tools,” Goodwill says. “They installed a trihalomethane-stripping aeration system in the tank just prior to the black swan event of the COVID-19 pandemic. We generated data in real-time on how a novel virus affected the levels of trihalomethane in a water storage tank. It was an interesting example of how a water system performs under stress.”

Aeration in the storage tank reduced the TMHs to acceptable levels. Communities not as prepared as Providence might be candidates for Goodwill’s antifragility approach, which addresses real-world problems and anticipates future challenges.

“As the land grant university in Rhode Island, I think one of our charges is to support our neighbors and help them with their problems. We have to be prepared to solve problems,” Goodwill says. “We’re no longer in a position to use water once and discharge it. What worked for the last 100 years isn’t going to work for the next 100.”