Three times Rosemary Leger filled a large mail cart full of new and never-worn children’s apparel and three times she tossed the clothing, hangers and all, into a dumpster.

The year was 2015. Leger was an undergraduate at Lasell University in Newton, Mass., an aspiring fashion journalist, and a children’s wear product development intern for a national clothing chain. She was appalled at the waste she saw. “I was asked to throw a whole dumpster’s worth of children’s wear samples into the trash. I couldn’t understand it: new clothing, on hangers, into the trash because it was a copyright thing.”

In the fashion industry, trashing never-worn apparel is not uncommon. In 2018, Forbes reported that the brand Burberry incinerated $38 million worth of new apparel in a single year to protect the luxury brand’s status. Luxury brands lose value in the marketplace if their products find their way into recycling bins or discount stores.

“I want to flip the narrative from consumer behavior to disposer behavior.”

That internship — and several subsequent years’ working in the fashion industry in which she witnessed more wastefulness — prompted Leger to change her focus. No longer interested in writing about fashion for major magazines, Leger enrolled in URI’s Textiles, Merchandising and Design program and earned a master’s in textile science. Now a Ph.D. student, she is studying sustainability, consumer disposal behavior, textile supply chain issues, and ethics in fashion with a focus on consumer behavior toward trash. “You can’t stop people from buying clothes, but when I turned my focus toward textile recycling I knew here was an avenue that could lead to a solution. 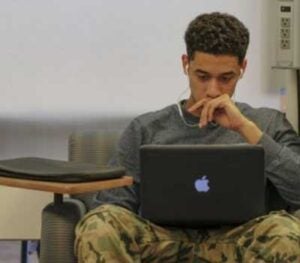 We are a community of big thinkers interested in new ways of looking at the world of today—and tomorrow. Here, you will learn to solve problems, innovate, think globally, and navigate your own path.

“I want to flip the narrative from consumer behavior to disposer behavior.”

We are a nation of disposers. The average American tosses 81 pounds of clothing annually. That’s 16 million tons of textile waste generated by Americans every year, according to the United States Environmental Protection Agency. Disposal, either by landfill or burning, generates methane, a greenhouse gas. And while donating used clothes is better than burying or incinerating them, it’s not a practice that’ll earn points when talking about the sustainability of the planet. Landfills are reaching their limits. Rhode Island’s Johnston Landfill will reach its capacity in 2034. Clothing manufacturing also consumes vast quantities of other natural resources. It takes about 1,800 gallons of water to produce the cotton required for a single pair of jeans. We have to change our ways if we want to live sustainably, Leger says.

“I want to tackle trash and human consumer behavior, specifically thinking about how you behave when you’re throwing away a thing,” Leger added. “What do you expect happens when you dispose of something?”

Changing behavior is not necessarily difficult, Leger says. Before purchasing a product, for instance, she advises doing a cost-per-wear analysis, which is simply thinking about how many times you are likely to wear the thing you are buying. Other simple changes: wash clothing in cold water using laundry detergent sheets rather than liquid soap. Then, air dry it. “About 50% of the climate impact of garments comes from their care. These are really easy swaps to make,” Leger says.

As part of her studies, Leger intends to engage in participatory action research, a kind of experiential learning of her own design. She’s considering either installing textile recycling bins in the fashion school or starting a campus surplus store stocked with discarded dorm room items. College and university campuses elsewhere have done the latter with great success. In 2021, Michigan State University’s Surplus Store and Recycling Center collected 13,000,000 pounds of materials from its campus community, diverting it from the local landfill.

Leger loves such stories. She intends to teach at the university level after completing her Ph.D. College students’ enthusiasm energizes her. “I love the academic environment,” she says. “Young people are so motivated when they’re in school but they can lose that motivation when they leave. If I can help them sustain that enthusiasm and momentum and be with them when they feel anything is possible, that’s motivation for me,” Leger says. “I think all of us want to make a difference.”