Watson House is open by appointment and welcomes group tours.  To schedule a tour or for more information please send an email to oliverwatsonhouse@gmail.com.

In I888 the State of Rhode Island purchased the 140 acre Watson farm for $5,000 in order to establish an agricultural school in Kingston. The farmhouse, probably built around 1796, is the oldest structure on the campus of the University of Rhode Island. This restored home, the Oliver Watson House, is a typical Rhode Island colonial two story farmhouse, which has been used for many purposes. At first the residence of the farm manager, it was soon converted into a women’s dormitory. Later it became in succession the home of Lambda Chi fraternity a men’s dormitory, a tea room operated by the Department of Home Economics, and finally a nursery school. In 1958, when the new Child Development Center was erected, Watson House was left idle. The farm house stands today as testimony to the University’s humble beginnings as the College of Agricultural Mechanic Arts.The house was named after its last owner, Oliver Watson, who occupied the house between 1844 and 1888.  At least nine different families lived in the house before 1844.

After becoming part of the College, Watson House was the residence of farm manager Herbert F. Adams.  In 1895, the farm house became the women’s dormitory.  The dormitory housed 14 girls. As such, Watson House became the first of the school’s buildings to be equipped with an indoor water closet.   Miss Anna B. Peckham, in the image, left,  was the preceptress.

Later the house became the home to Lambda Chi fraternity, a men’s dormitory and a tea room.  The tea room was operated by the Department of Home Economics. 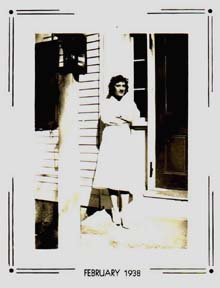 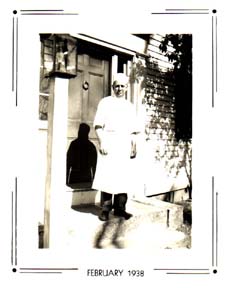 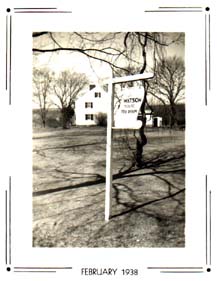 The last active use of the Watson House was a nursery school.  In 1958 a new Child Development Center was built and the house was left abandoned. By the fall of 1962,  the Watson House had been idle for nearly 6 years and was in need of costly repairs.  Frances Horn announced that it was too expensive to repair, estimating the costs between $30,000- $50,000.  Rather than tear the building down, the Board of Trustees of State Colleges had approved the sale of the building for $500 to a West Kingston business man who planned to dismantle and rebuild it another location.

In January 1963, under the leadership of President Emeritus Dr. Carl Woodward $20,000 raised to restore Watson House. The Board of Trustees pledged the additional restoration costs. Restoration and refurbishing of the house was completed in 1964. By the early 1970s with the house restorations complete, the house was furnished in keeping with the period between 1790-1840.