Phragmites australis sometimes called Common Reed is an invasive perennial wetland reed native to Asia and Europe. P.australis was likely introduced to the United States through by means of ballast expelled from ships that came from Europe in the late 1700s or early 1800s, where it is grown commercially for thatching and as animal fodder.
Phragmites australis stems begin to grow in spring, and the rhizomes of the plant will spread throughout the growing season. The stems of P.australis can grow to heights of 5-10 ft tall with a diameter of 0.4-1.6 inches. The flowers form in late June in large bushy panicles, maturing to seed by August or early fall which are then spread by wind but . Phragmites spreads primarily through horizontal growth of its rhizomes throughout the season, allowing one plant to quickly colonize and dominate an area.

Herbivores on Phragmites in North America (View the presentation)

Abstract: Over the past several decades, Phragmites australis populations in North America have dramatically increased in wetlands, particularly along the Atlantic Coast. All current control methods produce only partial or short-term control. Biological control has been proposed as a long-term control measure for P. australis. A table of insect herbivores known to feed on P. australis is provided as an important resource prior to serious consideration of biological control (Table 1). According to our literature review and field survey, there are 26 insect herbivore species known to feed on Phragmites australis in North America; 16 are recent introductions, five species are of unknown status, and only five are native. Only the Yuma skipper, Ochlodes yuma (Edwards), a species distributed throughout the western United States, and a gall midge,Calamomyia phragmites Felt, are considered native and monophagous on P. australis.

Map of Native and Exotic Phragmites on Block Island 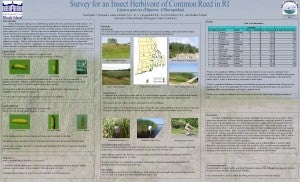 Phragmites and the Mealy Plum Aphid 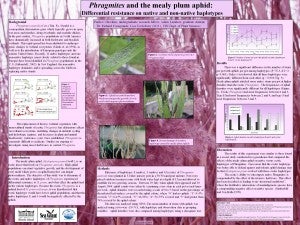 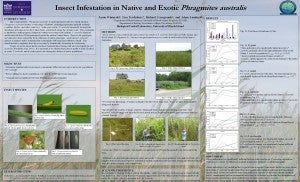