In 2016, 137.5 million Americans voted in the presidential election. For some Rhode Islanders, casting their ballot wasn’t easy.

Some waited in line for up to five hours to cast their votes. Afterward, Rhode Island’s Secretary of State Nellie Gorbea asked the University of Rhode Island’s College of Engineering for help understanding what went wrong. “Industrial and systems engineering is the perfect discipline to help with these types of challenges,” says Gretchen Macht, assistant professor of mechanical, industrial, and systems engineering. “We know that a voter’s experience is fundamentally different depending on where you’re located. And then that directly influences whether or not you’re going to vote again.”

Six years later, voters are the most polarized they’ve been in decades. The Pew Research Center reports that partisan animosity has doubled since the mid-1990s with both sides seeing the other’s policies as a threat to the well-being of the country.

How do we sustain a republic? Restore faith in the election process, says Gretchen Macht.

“People will believe in the results of an election when their person won or their voting experience was easy.”

As the founding director of URI VOTES, Macht is taking an engineer’s approach to election science. She and her team of graduate and undergraduate students study voting through various lenses: voting in person versus voting by mail, how the accessibility of polling places affects persons with disabilities, strategies to avoid COVID infection in polling places, election law, allocating election resources, and the arrangement of polling place facilities, among them. The team then make data-based recommendations to election administrators on how to improve the voting process. 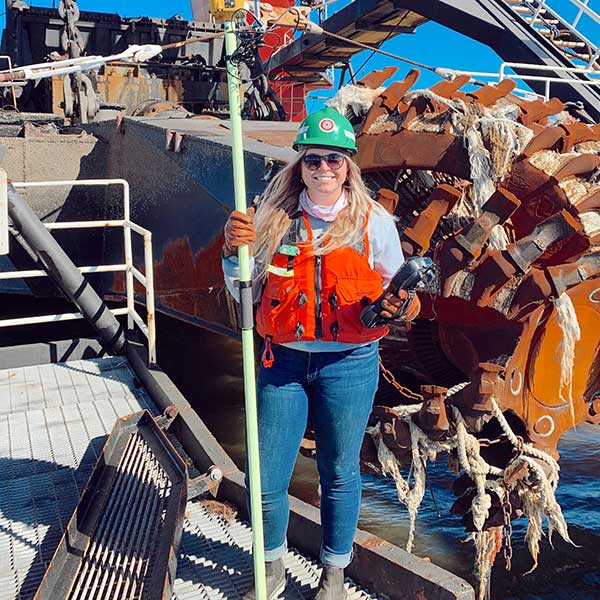 URI Votes will use the 2022 midterms to better understand vote-by-mail tabulation. “Some of the issues in the past presidential election concerned election administrators saying to the public, ‘This is how long it’s going to take us to count all these votes by mail’ and when the counts didn’t meet voters’ expectations, they thought things were wrong with the election,” Macht says.

‘My elections work is a calling’

Macht and her team use simulations to understand the time and circumstances necessary for election officials to do their jobs correctly.

“Real data can help us understand the human experience,” Macht said. “People will believe the outcome of an election under two conditions: one, their person won, two, their voting experience was easy.”

URI VOTES is also developing an app, as well as training videos, and other tools to assist election officials in improving the voting process and experience. The group’s work is getting noticed. Just this year, URI VOTES has received grants totaling close to $700,000 ($250,000 from the Democracy Fund and more than $430,000 from the United States Election Assistance Commission).

Macht’s work recently earned her expert status in the sector; she was named an election expert by the Board of MIT’s Elections Lab. “My elections work is a calling. It is inspiring to watch democracy at work, and now it’s become a question of how can I continue to make this happen? How can I continue to help?”

“We have this idea that we must change people and not the system because the system itself is too complicated, but if we can just change certain elements of the system — that in itself can create enormous contributions. Understanding how people are actively using systems enables making informed decisions. That is how we can start to create more optimal solutions.”