In 2020 we celebrate two monumental events in American history: the 100th anniversary of the ratification of the 19th Amendment, granting American women the right to vote, and the 150th anniversary of the 15th Amendment that at least nominally enfranchised African American men. To mark the occasion, URI is planning a yearlong virtual series focused on suffrage history and modern-day voting issues. 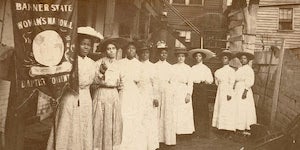 Long Rhode to the Vote

Please register to attend here. This event is sponsored by the College of Arts and Sciences, the Gender and Women’s Studies Program, and the Honors Program.