Asian long-horned beetle (Anoplophora glabripennis, ALB) is an invasive beetle belonging to the family Cerambycidae that threatens our native hardwood trees. It was first identified in the United States in Brooklyn, New York. Native to Asia, the beetle was transported across the sea in cargo ships delivering hardwood materials from China to the US. Adults range from 0.5 to 1.5 inches long and their body is black with white spots on each wing. Some beetles may also have blue and black banded legs. Their antennae are black-and-white striped, and can grow up to 2 times the length of their body!

Females eat through the bark of the host tree and make a small hole called a “pit,” where they lay. Once hatched, ALB larvae can reach up to 2 inches long! The larvae will eat through the bark creating tunnels called “galleries,” and as the temperature drops they burrow further into the tree. Once fully pupated, adults will chew their way out of the tree leaving a large hole in the bark. Their emergence period is from June through October.

ALB feeds on many hardwood trees such as maple, birch, elm, ash, willow. Their galleries and emergence holes can damage the tree, compromising the strength and core integrity of the trunk. Too much damage to an individual tree can kill it, thus as a result this pest threatens our lumber-dependent agricultural and economic prospects.

While ALB has not yet been found in Rhode Island, it does reside in neighboring states such as Massachusetts and New York, with the closest population to RI being in Worcester, MA . There is no current biocontrol method to contain this pest, so it is important that we take care to check trees for symptoms and report immediately if an infestation is suspected. Symptoms that may present on infested trees include emergence holes, round depressions in the bark, frass buildup at the bottom of the tree, and yellow or drooping leaves. The USDA is urging the public to actively check trees for symptoms and to not move untreated firewood.

If you suspect you have found asian long-horned beetle, use the RI Department of Environmental Management’s Invasive Species Sighting Report Form. 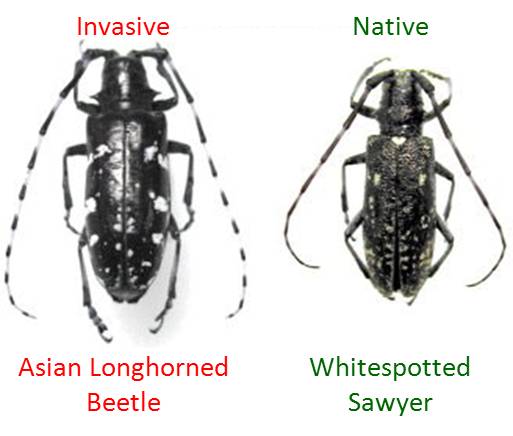