Emerald ash borer (Agrilus planipennis, EAB) is an invasive tree pest from Asia, which was initially detected in Rhode Island in July 2018. EAB has the potential to cause rapid mortality of ash trees, thus, identifying its presence in Rhode Island and working to slow its spread is very important. 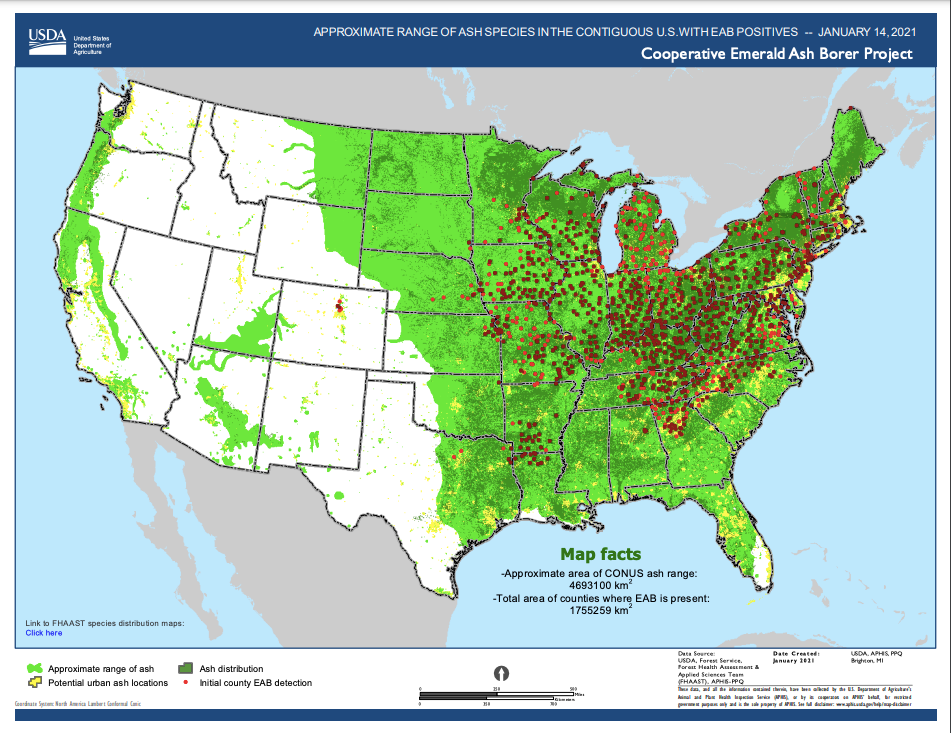 EAB was first discovered in southeastern Michigan and Ontario, Canada, in 2002 and has quickly spread across 35 states in the US (Fig. 1). For an interactive map of the current EAB distribution in the US, see the USDA APHIS dashboard of known infested counties. In its native range, EAB primarily infests Chinese ash (Fraxinus chinensis). However, in North America EAB attacks green ash (F. pennsylvanica), white ash (F. americana) and black ash (F. nigra).

Adults (Fig. 3) are 0.3-0.5 inches long, generally have dark, metallic, emerald-green wings, and a purplish-red abdomen. Larvae (Fig. 2) are 1.0-1.3 inches long and their bodies are white or cream colored with light brown heads. Females lay eggs in bark crevices or under bark flaps from mid-June to August. Within 7-10 days, newly hatched larvae penetrate the tree and feed between the bark and sapwood. Larvae overwinter in shallow chambers and pupate in late April or May, and adult emergence occurs in mid-June through early July.

EAB may be difficult to detect when infestation levels are low. Jagged holes from woodpeckers feeding on larvae are early signs that a tree may be infested (Fig. 4). Additionally, exposure of inner, light-colored bark caused by woodpecker feeding results in a whitening of the tree (called “blonding”).  When bark is removed from an infested tree, distinct serpentine or S-shaped larval feeding galleries may be seen (Fig. 5).

Newly emerged adult EAB leave D- shaped exit holes (about 1/8 in. diameter) in the bark of the branches or trunk (Fig. 6). Once emerged, adults feed on the foliage of ash trees. At higher infestation levels, canopy dieback in the crown may be evident (Fig. 7). Epicormic shoots on the trunk or branches may be indicative of stress due to EAB infestation as well (Fig. 8).

Chemical control with insecticides is available to protect high-value ash, such as landscape trees in urban settings. Biological control is considered the primary long-term management tool to suppress EAB in forested ecosystems. One egg parasitoid (Oobius agrili) and three larval parasitoids (Tetrastichus planipennisi, Spathius galinae and S. agrili) have been approved for biological control of EAB in the North America. The URI Biocontrol Lab is currently releasing O. agrili, T. planipennisi, and S. galinaeto combat EAB in Rhode Island. Long-term release sites will be continually monitored to determine the impact of these biocontrol agents.

If you suspect you have an infested ash tree, report the find at the DEM report page. For more information on prevention and management options, see the RI DEM Emerald Ash Borer Statewide Technical Response Plan. 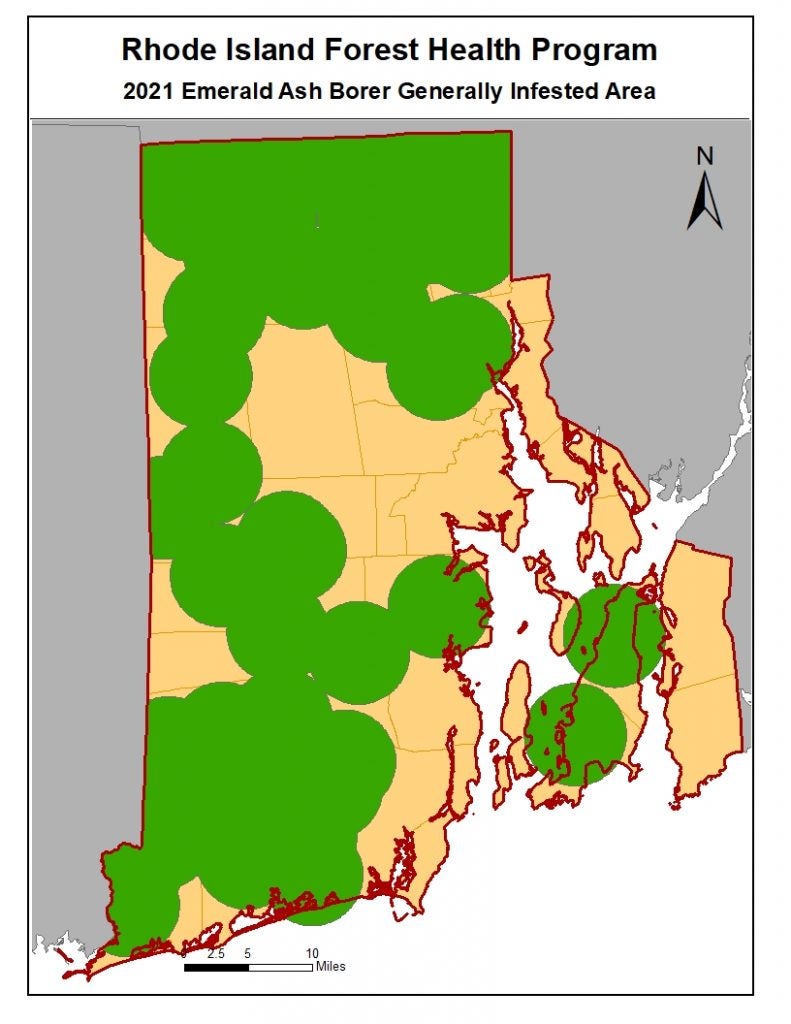 What is Emerald Ash Borer?