Knotweeds are invasive plants belonging to the buckwheat family (Polygonaceae). Knotweeds found in the US include two parent species, Japanese knotweed, and giant knotweed, and a hybrid species, Bohemian knotweed. Japanese knotweed is native to locations in East Asia including Japan, China, and Taiwan, similarly, giant knotweed is native to northern Japan and Russia.

Knotweeds are a problem in North America, despite its invasion still being in the early stages. These plants can become very dense due to a scarcity of insect herbivores to keep populations in check. Invading knotweeds can have ecological impacts on existing plant and invertebrate communities by displacing native plants through shading caused by dense knotweed thickets. Knotweeds also can have effects on soil erosion along stream banks as knotweed root systems are not able to hold the surface soil and can lead to increased soil erosion. For more information about knotweeds, see the Plant Conservation Alliance’s Japanese Knotweed Factsheet.

Biological control of knotweeds currently involves one biocontrol agent, Aphalara itadori, a psyllid native to Japan. All stages of this insect feed on leaves and stems of knotweed by using their mouthparts to remove the sap. Sap feeding of this psyllid causes leaf deformation, which in turn reduces energy production and supply for growth. Typically, one female can lay up to 700 eggs during her lifetime on knotweed leaves and stems. Eggs are creamy-white and elongated and hatch after about 12 days.  The nymphs that hatch from these eggs complete 5 instars before becoming adults. Aphalara itadori was approved for release in the US in 2020.

The biocontrol program of invasive knotweeds includes the release and monitoring of A. itadori in 8 states in the United States. These states include NC, WV, NJ, RI, MA, NY, OR, and WA.   Specifically, in RI, URI Biocontrol has released the psyllid at three locations throughout the state including one with giant knotweed. After monitoring, new generation adults were found at each of the three sites. URI Biocontrol continues to monitor the establishment and spread of A. itadori. For additional information, watch Cornell University’s Bernd Blossey present a virtual knotweeds biocontrol update. 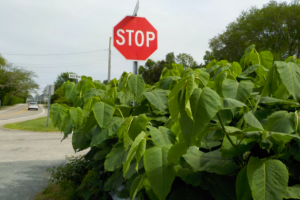 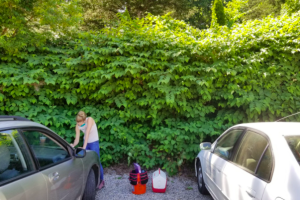