The Mile-a-minute vine (Persicaria perfoliata), which is related to native “tearthumb” (Persicaria sagittata), is an aggressively growing invasive annual vine native to Eastern Asia. Mile-a-minute was first found in the United States in Portland, Oregon in the 1890s and was later found in the late 1930s in Maryland and Pennsylvania. Since its introduction it has spread throughout most of the Northeastern United States and as far south as North Carolina. Mile-a-minute vine is distinctive for its triangular leaves, flat ocrea (bracts) and recurved prickles that grow along its stem and leaf veins.

Mile-a-minute has the ability to grow up to 6″ per day totaling approximately 20′ per season; forming dense mats of intertwining stems and leaves which grow over, shade, and smother nearby plants.

Seeds begin to germinate in early spring (late April to early May). Midsummer the plant begins to produce clusters flowers at the tip that will produce achenes, which are berry-like structures containing seeds (approx. 200-500 seeds per 0.5m2) (Hough-Goldstein et al. 2008), which initially are a pale green turning to a deep purple as they mature. These seeds can last for up to 6 years in the soil and can be easily dispersed by birds and water.

Mile-a-minute is most commonly found in areas of full sun and well drained soil on roadsides, along forest edges, uncultivated farmland, and along the banks of streams and brooks.

In 2004, a release permit was granted for the host specific Rhinoncomimus latipes weevil as a biological control agent against Mile-a-minute vine. R.latipes is a small black weevil approximately 2mm in length which feeds on the tips of the Mile-a-minute vine where they lay their eggs, as well as the achenes and leaves. When the eggs hatch, the larvae feed down into the stem. After 7 or 8 days the larvae chew out of the stem and drop into the soil and pupate for 10-14 days in the soil where they then emerge as adults and begin feeding.

Since 2010, we have been rearing R.latipes weevils for release throughout the state of Rhode Island and we also distribute it to cooperators for release in Connecticut and Massachusetts. We have been releasing these weevils and monitoring their impact at several sites in Cranston, two sites in East Greenwich, and have begun releasing at one site in Hopkinton, RI. We are currently looking for new sites for release and monitoring throughout Rhode Island. If you have seen Mile-a-minute or believe you may have seen it please let us know by contacting Lisa Tewksbury at lisat@uri.edu. 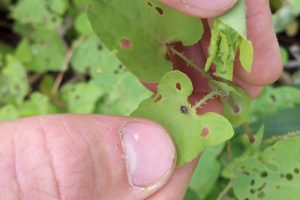 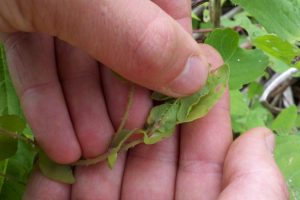 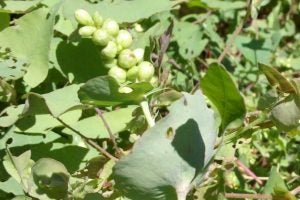 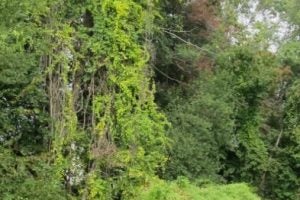