The University of Rhode Island was the first academic institution world-wide to establish a graduate program in ocean and coastal policy, management, and law. 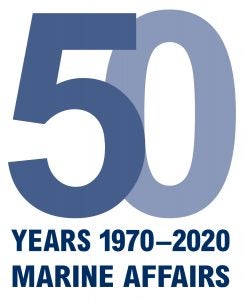 The genesis of the program stems from the work of the Stratton Commission, established by congressional statute in 1966. The Commission was created for the purpose of undertaking a studied and comprehensive consideration of the marine environment, its resources, and its uses. The members of this commission, appointed by President Lyndon Johnson and ranking members of Congress, included John Knauss, the first Dean of the University of Rhode Island’s Graduate School of Oceanography. Prof. Lewis Alexander, the founder of the Geography Department at URI, was selected to serve as Deputy Director of the Commission staff. In 1969, the Commission issued its influential report, Our Nation and the Sea. The report addressed a variety of ocean/coastal issues including fisheries, mineral exploitation, and marine scientific research and led to the creation of the National Oceanic and Atmospheric Administration (NOAA). It also set the stage for the later passage by Congress of the Coastal Zone Management Act and the Fisheries Conservation and Management Act.

Based on their experience with the Stratton Commission, Prof. Alexander and Dean Knauss acted on their belief that not only was marine science important in ocean/coastal affairs, but that there was a need for the social sciences to become engaged in these matters as well. Accordingly, in 1969 the Graduate Program in Marine Affairs was established to provide a one year program leading to the Master of Marine Affairs degree. This program was designed for individuals who already had an advanced degree or five years of experience in marine related fields. Students were drawn from federal and state agencies and the U.S. Navy. The U.S. Coast Guard also sent several students each year to the program and some international students were sponsored by the Intergovernmental Oceanographic Commission of the United Nations Educational, Scientific, and Cultural Organization (UNESCO).

Over time the Geography department, which housed the Graduate Program in Marine Affairs, evolved into the Department of Marine Affairs. Its faculty grew and became multidisciplinary with the addition of individuals trained in political science, law, marine science, anthropology, environmental protection, planning, and economics.

The Department of Marine Affairs resides in the College of Environment and Life Sciences and since its inception, it has accepted students from all over the United States and from more than forty countries. Its graduates work in government service, non-governmental organizations, industry, and academia. The department’s mission is to provide leadership in the management of marine and coastal environments through distinction in teaching, research, service, and outreach programs. To accomplish its mission, the department emphasizes multidisciplinary and ecosystem-based approaches to ocean/coastal governance and management.