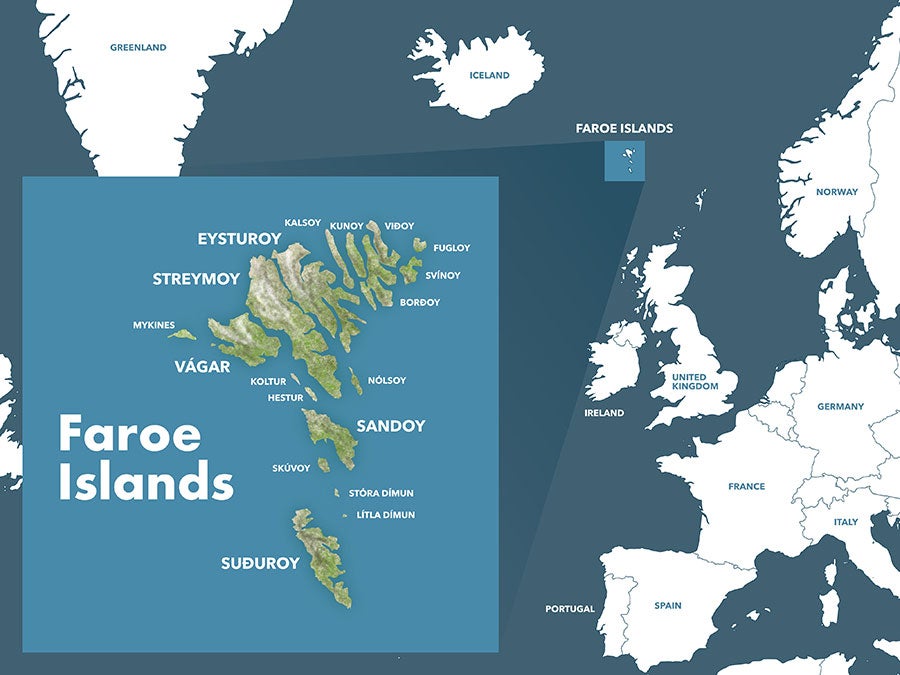 The Faroe Islands constitute about a dozen inhabited islands with a population of slightly more than 50,000. The Faroes are a self-governing nation under the external sovereignty of the Kingdom of Denmark. This prosperous fishing community is situated in the heart of the Gulf Stream in the North Atlantic, northwest of Scotland and halfway between Iceland and Norway.

Like many other communities around the world, the Faroes are primarily exposed to PFAS through consumer products; however, they have a secondary source of exposure of interest from an environmental health viewpoint, which is through their traditional dietary habits of consuming pilot whale meat and blubber. Local health officials have been discouraging the practice, but whale meat is to the Faroese what burgers are to Americans. There is no manufacturing of PFAS or consumer goods in the Faroes, but due to biomagnification of these persistent substances, the Faroese are exposed to industrial contaminants from faraway sources—in large measure North America— and at total levels from consumer goods and whale meat that, in some cases, greatly exceed those normally encountered elsewhere.

The Faroese have a strong sense of community wherein hospitality is innate. Their culture is the foundation of Faroese pride with a strong emphasis on tradition and the arts, an independent language and flag. In a generation, with the help of the fishing trade that accounts for approximately 20 percent of GDP, Faroese affluence has grown in the widespread use of technology and well-established infrastructure that connects the 18 islands by roads, bridges, and subsea tunnels, making it effortless to travel around the country. This, along with first class telecommunications and high-speed Internet, provides a superb base for maintaining the economic, social and cultural sustainability of communities all around the country. Yet, the overall health threats from toxic chemicals to the current and future generations of Faroese are compelling and timely.

A Partnership is Formed

STEEP co-lead Philippe Grandjean, MD, DMSc, has partnered in this longer-term study site with Pál Weihe, MD, Adjunct Professor at The University of the Faroe Islands and Consultant, Head of the Department of Occupational Medicine and Public Health, and former Medical Director for the Faroese Hospital System. Their initial work focused on the effects of mercury in the diet of the Faroese and expanded to include PFAS. They have been studying cohorts of ~2300 Faroese children since 1985. In this North Atlantic fishing community, they have identified groups of PFAS reflecting likely exposure from consumer products and others ingested through the consumption of whale meat—a practice that is both culturally and economically important.

STEEP in the Faroes

Since 1985, STEEP researchers have conducted cohort studies in the Faroes with successful follow-up rates and minimal attrition. These cohorts were formed much before concerns about the effects of PFAS on health arose, but the STEEP Childhood Risk study has taken advantage of this unique epidemiological setting to newly analyze banked blood samples for PFAS concentrations to determine possible links between PFAS exposure profiles, immune dysfunction, and metabolic abnormalities. to  The data analysis will take into account other factors, including exposures to other environmental chemicals, sex of the child, and diet. 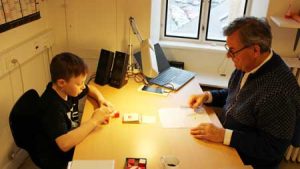 he Faroese population of 50,000—primarily of Nordic and Irish origin—is fairly homogenous. This homogeneity combined with the high participation rate in the clinical follow-up represents advantages that would be nearly impossible to match anywhere else. The Faroese are also comparable in many ways to other Western populations, ensuring that the results will inform exposure risks not only in the Faroes, but also in other communities around the world, including residents in STEEP’s Cape Cod study site that may also be exposed to high levels of PFAS.

PPTOX VII CONFERENCE
Chicago, Illinois
Postponed to June 2021 due to COVID
Philippe Grandjean Conference Co-Chair
This bi-annual international conference will return to the U.S. after a successful event in the Faroe Islands in 2018. The overall purpose of the conference is to assess the weight of evidence and highlight new achievements on the effects of prenatal and early postnatal exposure to toxicants, as well their effects on pre- and postnatal development.
Learn More

This continued research will take place in offices and laboratories located in the Department of Occupational Medicine and Public Health—part of the Faroese Hospital System—and at the University of Southern Denmark, and it will continue to enrich STEEP’s understanding of the adverse health impacts of PFAS.

A partnership of the University of Rhode Island, Harvard University, and the Silent Spring Institute. Funded under grant P42ES027706.
ConnectApplyTourGive