Five have never been seen in nature before 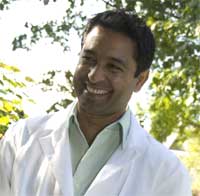 KINGSTON, R.I. – March 30, 2011 – University of Rhode Island researcher Navindra Seeram has discovered 34 new beneficial compounds in pure maple syrup and confirmed that 20 compounds discovered last year in preliminary research play a key role in human health.
Today at the 241st American Chemical Society’s National Meeting in Anaheim, Calif. the URI assistant pharmacy professor is telling scientists from around the world that his URI team has now isolated and identified 54 beneficial compounds in pure maple syrup from Quebec, five of which have never been seen in nature.
“I continue to say that nature is the best chemist, and that maple syrup is becoming a champion food when it comes to the number and variety of beneficial compounds found in it,” Seeram said. “It’s important to note that in our laboratory research we found that several of these compounds possess anti-oxidant and anti-inflammatory properties, which have been shown to fight cancer, diabetes and bacterial illnesses.”
These discoveries of new molecules from nature can also provide chemists with leads that could prompt synthesis of medications that could be used to fight fatal diseases, Seeram said.
“We know that the compounds are anti-inflammatory agents and that inflammation has been implicated in several chronic diseases, such as heart disease, diabetes, certain types of cancers and neurodegenerative diseases, such as Alzheimer’s,” Seeram said.
As part of his diabetes research, Seeram has collaborated with Chong Lee, professor of nutrition and food sciences in URI’s College of the Environment and Life Sciences. The scientists have found that maple syrup phenolics, the beneficial antioxidant compounds, inhibit two carbohydrate hydrolyzing enzymes that are relevant to Type 2 diabetes management.
The irony of finding a potential anti-diabetes compound in a sweetener is not lost on Seeram. “Not all sweeteners are created equal,” he said.

Among the five new compounds is Quebecol, a compound created when a farmer boils off the water in maple sap to get maple syrup. It takes 40 liters (10.5 gallons) of sap to make 1 liter (2 pints) of syrup.
“Quebecol has a unique chemical structure or skeleton never before identified in nature,” Seeram said. “I believe the process of concentrating the maple sap into maple syrup is what creates Quebecol. There is beneficial and interesting chemistry going on when the boiling process occurs. I believe the heat forms this unique compound.”
Seeram said he and his team chose the common name of Quebecol for the new compound to honor the province of Quebec in Canada, which leads the worldwide production of maple syrup. Seeram’s research was supported by the Conseil pour le developpement de l’agriculture du Quebec (CDAQ) and Agriculture and Agri-Food Canada (AAFC) on behalf of the Canadian maple syrup industry.
“Producers, transformers and partners of the Canadian maple industry believe that investing in maple syrup knowledge and innovation will bring the products to another level in a few years,” said Serge Beaulieu, president of the Federation of Quebec Maple Syrup Producers and member of the Canadian Maple Industry Advisory Committee.
“Quebec Maple Syrup Producers are especially proud to be leading this long-term innovative strategy on behalf of the Canadian industry and with the talented scientists of the Canadian Maple Innovation Network.”
Genevieve Beland, marketing director of the Federation added, “Maple products’ composition is unique and we are at the starting point of a new era. Ten years from now consumers will appreciate 100 percent pure maple products because they are delicious, natural and have a number of healthy compounds.”
“As we continued our research in the past year, we were astonished when the number of beneficial compounds that we isolated is now more than double the original amount,” said Seeram, who is releasing his findings today.
Seeram is the organizer of the daylong symposium on “Bioactives in Natural Sweeteners,” and is joined by scientists from Canada, Japan, Mexico and the United States to discuss natural sweeteners. Seeram’s collaborations with Angela Slitt, assistant professor of biomedical sciences in URI’s College of Pharmacy and Professor Lee, will also be presented during the meeting.
Seeram’s findings will be detailed in his article recently accepted for publication in the Journal of Functional Foods. The title of the paper is “Quebecol, a novel phenolic compound isolated from Canadian maple syrup.” In addition, Seeram and Lee’s work on diabetes and maple syrup will also be published in an upcoming edition of the Journal of Functional Foods.
“I can guarantee you that few, if any, other natural sweeteners have this anti-oxidant cocktail of beneficial compounds; it has some of the beneficial compounds that are found in berries, some that are found in tea and some that are found in flaxseed. People may not realize it, but while we have a wide variety of fruits and vegetables in our food chain, maple syrup is the single largest consumed food product that is entirely obtained from the sap of trees,” Seeram said.
Reiterating a statement he made last year, Seeram said no one is suggesting that people consume large quantities of maple syrup, but that if they are going to use a sweetener on their pancakes, they should choose pure maple syrup and not the commercial products with high fructose corn syrup.
“Pure maple syrup is not only delicious, it is so much better for you,” Seeram said.
Funding of CDAQ is provided through Agriculture and Agri-Food Canada’s Advancing Canadian Agriculture and Agri-Food program. AAFC has been able to provide financial support for maple syrup research through the program ‘Growing Canadian Agri-Innovations’.
Media Contact: Dave Lavallee, 401-874-5862