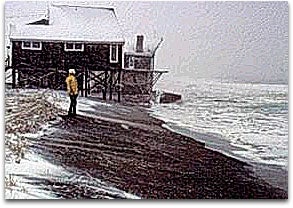 Research stresses an integrated approach to the study of geomorphic and sedimentary processes, landform development and change at varying size and time scales, and arrangement of internal structure of resulting morphologic forms. Past and ongoing studies involve fluvial processes on braided rivers in Alaska, the measurement of shoreface, beach, barrier and headland morphologic change including long-term (for past 29 years) beach profile stations on the coast of Rhode Island, lagoonal and estuarine tidal-current processes and resulting morphologic forms, the geology of wetlands, the investigation of lithofacies and interpretation of depositional processes in Pleistocene-age glacial fluvial, glacial lacustrine, and glacial marine environments in eastern Maine, outer Cape Cod and Rhode Island. Geologic studies in support of archeology investigated the landscape and climate that existed during early post-glacial time when humans first occupied what is now southern New England.

Present work includes: the study of the Quaternary geology of Narragansett Bay, particularly the deglacial history of the Bay by means of side-scan sonar and subbottom reflection profiling; the digital mapping of shoreline change for both Narragansett Bay and the south shore of Rhode Island; the understanding of coastal geologic hazards due to geologic processes operating during storms: and the study of the geologic aspects of coastal-zone planning federal and state coastal zoning changes to reflect shoreline retreat caused by storms and inundation from accelerated sea-level rise due to global warming.