URI’s jazz performance program is a diverse, active and versatile combination of big bands and ensembles, all strongly supported by the university’s course offerings and degree programs. Jazz ensemble directors are faculty members who are highly acclaimed performers and recording artists recognized in their fields.

The URI Big Band has performed at the Newport Jazz Festival in 2013, 2014, 2015, 2016, 2017, 2018, and 2019. The URI jazz groups play at many other regional jazz festivals and venues, and offer a Jazz Concert Series on campus in both Fall and Spring semesters each year. Jazz ensemble participation is assigned by audition to URI students. 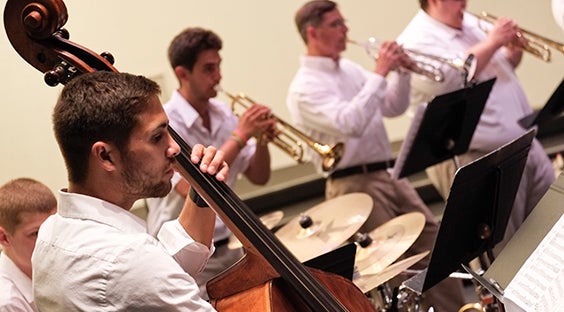 In addition to recent performances at the Newport Jazz Festival, the URI Jazz Big Band has in the past performed at Lincoln Center, taken first place at the MIT New England Intercollegiate Jazz Festival, and performed at many concerts and events on campus and throughout New England. It is one of Rhode Island’s premier jazz ensembles.

The URI Big Band is directed by Emmett Goods. 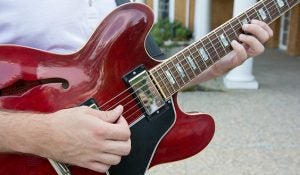 Jazz combos at URI perform a wide array of jazz music while focusing on traditional jazz improvisation techniques.  Each group has a faculty coach and the small jazz ensembles can change according to active interest.

The groups serve many music majors and minors each semester and include ensembles directed by Jay Azzolina, Mark Berney, Zaccai Curtis, John McKenna, and Dave Zinno,