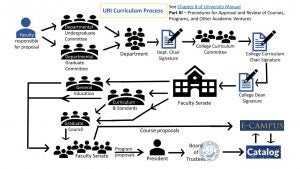 Curricular procedures have been developed in order to facilitate the integration of curricular proposals, legislative action, the e-Campus Course Schedule, and the University Catalog.  Faculty, department chairs, and college curriculum committees are asked to give very careful consideration to the completion of curricular forms. The information provided is used to directly inform the course schedule (e-Campus), academic advising, the Catalog, and in some cases, admission materials.

Signatures of approval verify that the information provided on a proposal is factually accurate and that all possible curricular impacts both within and outside of the originating department have been considered.  Faculty proposers, department chairs, and college curriculum committees must ensure that proposals are prepared according to guidelines and are complete prior to submission.

In planning for the first offering of 1) a newly proposed course or academic program, or 2) the implementation of changes to an existing course or academic program, please be aware that the review and approval of a proposal is a multi-step process that can take several months and is not complete until the course/course change is officially listed in e-Campus or, with regard to programs, until notification has been received from the Rhode Island Office of the Postsecondary Commissioner. To monitor the progress of a proposal, check the Proposal Tracker maintained by the Faculty Senate Office.

It is advisable to think “a year ahead.”  The length of time for full approval of program proposals often depends on the complexity of the proposal.  Generally, a course proposal that is intended to be effective in a fall semester should be submitted the prior fall.  There may not be sufficient time for proposals submitted in the spring to be fully approved before the end of the academic year (see important academic year deadlines).  Note: only existing courses, approved for scheduling, may be listed in program proposals; only courses with approved courses may be forwarded to the Faculty Senate for approval.

General Principles
The Curriculum and Standards Committee reviews undergraduate curriculum matters, including proposals for courses at the 100-, 200-, 300-, and 400-levels. The Graduate Council processes graduate curriculum matters, including proposals for courses at the 400- (for graduate credit), 500-, 600-, and 900-levels. If a proposal for a 400-level course indicates that it is to be offered for graduate credit as well as undergraduate credit, it is processed by both committees. These review committees, which meet monthly, submit approved proposals to the Faculty Senate for action (approval at a Faculty Senate meeting).  Program proposals approved by the Senate require the President’s approval; new courses and course changes do not require the President’s approval.  Some program proposals also require review by the Council on Postsecondary Education.