URI researchers plan to triple northeast sales of maple products from $9.7 to $29.4 million

October 23, 2018: A new, federally funded initiative at the University of Rhode Island will promote the maple industry throughout the Northeast, stressing the sustainability and market value of this local crop and the potential health benefits of maple food products.

The United States Department of Agriculture’s Acer Access and Development Program has awarded nearly half a million dollars to researchers from three colleges at URI to raise public awareness of maple products and the potential benefits of the natural sweetener, increase consumption and promote the industry. The initiative, dubbed the Collaborative to Communicate Maple Benefits, will target all of New England as well as New York and New Jersey.

Navindra Seeram, professor of biomedical and pharmaceutical sciences, College of Pharmacy; Yinjiao Ye, professor of communication studies in the Harrington School of Communication and Media, College of Arts & Sciences; and Christy Ashley, associate professor of marketing, College of Business, are principal investigators on the three-year, $499,427 grant. This is the third USDA grant awarded to URI for maple research.

URI is in the center of the maple producing region. Maple trees grow only in North America, so our maple syrup and sap products cannot be outsourced,” said Seeram, arguably the world’s leading expert on maple research. “While New Englanders appreciate maple trees’ beauty and may enjoy a drizzle of syrup on their pancakes, many are unaware of maple’s potential health, environmental and economic value.”

This project aims to change that.

But the initiative goes beyond promoting health outcomes, Seeram said. It fulfills URI’s mission as a Land Grant University through learning, research and service as well as harkening back to the University’s agricultural roots. The project also highlights the University’s strength in interdisciplinary research. Bringing together experts from diverse disciplines gave URI a competitive edge in seeking the federal funding, team members said.

For example, Ye’s expertise lies in health outcomes communication, and she is responsible for building a mobile-friendly web portal and directing social media outreach. “It’s going to be an exciting journey for me to work with marketing and pharmacy professors, and I believe it will be very fruitful. It is a perfect combination of our specialties,” she said.

Ashley will coordinate marketing promotions and indicators of success, establishing baseline measures of sales and consumer attitudes around maple products and making promotional material available online. By tracking metrics, analyzing trends and conducting consumer surveys, the team can tweak tactics and strategy as needed. And students in Ashley’s social media marketing class will be given a budget and tasked with creating a promotional campaign for maple products. 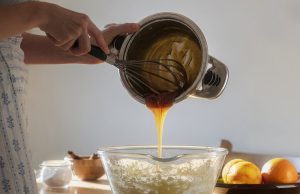 Activities will involve undergraduate and graduate students — in and out of the classroom — the University Cooperative Extension’s network of master gardeners and a culinary class at Johnson & Wales University in Providence, which will use maple as a “hero” ingredient. The team also will recruit student ambassadors to travel to farmers’ markets and other events as members of a Maple Promotion League and will engage maple producers, investors, maple hobbyists, social media influencers and early adopters (proponents of sustainable agriculture and healthy eating, for example

“We will generate marketing activities and determine what works,” she said. “We can then turn over our findings to maple industry stakeholders.”

The International Maple Syrup Institute, North America Maple Syrup Council and the Federation of Maple Syrup Producers of Quebec — major industry stakeholders — already have promised their support and involvement. In fact, the Federation began funding Seeram’s research into maple syrup’s potentially beneficial compounds in 2009, and the fruitful partnership continues today with funding of ongoing research in his URI lab. The Federation’s early commitment to his work enabled Seeram to make significant findings, which then led to grants from additional sources, he said.

Enhancing the economic clout of the maple industry is another objective. The United States is the world’s largest consumer of sweeteners, including corn sweeteners and other syrups. True maple syrup — NOT pancake syrup — accounts for only one percent of this market, leaving much room for growth.

With 56 million people living in the project’s coverage area, the researchers estimate that they can triple the number of maple users over three years, boosting sales from $9.7 million to $29.4 million. They also hope to encourage increased maple sales and demand, and entice investors to the industry.

With so many stakeholders and partners, the team is confident that the project’s work will be sustained beyond the life of the grant. They envision the web portal as a clearinghouse of cutting-edge research findings, consumer-friendly information, marketing tools and even recipes.

“We are creating something that will be long lasting, beyond the three-year grant,” Ye said.