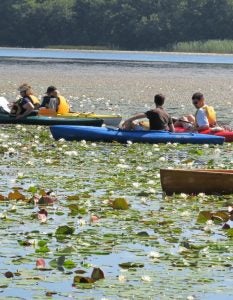 The URI Watershed Watch program is a partnership between the URI Cooperative Extension, the State of Rhode Island, and many local organizations.  Our long-term success is due to these partnerships.  These partners provide financial and in-kind support, assist with volunteer recruitment and management, help interpret and disseminate monitoring information, and guide program improvements.

Many Conservation Commissions, boards and departments support volunteer monitoring with URI Watershed Watch.   Their decisions and policies on water quality issues rely on this data.
*Year indicates when sponsorship began (and in some cases when it ended)

Watershed organizations and other environmental or sporting organizations are important local sponsors and partners, as well as frequently the most effective users of the data.
*Year indicates when sponsorship began (and in some cases when it ended)

These are other organizations with which URI WW works to provide a variety of services, exchange information and share resources: