In 1967, at the then brand-new—and first of its kind in New England—computer science department at the University of Rhode Island, people spent a lot of time punching cards.

In those days, a single huge mainframe computer took up most of Tyler Hall’s basement. It had less computing power, says Professor Edmund Lamagna, than one of today’s smart phones.

Students initially came for master’s degrees in computer science and statistics. Undergrad programs launched in 1975, and Lamagna, then a young assistant professor, was hired the following year.

There was no simple keyboard interface. Instead, “Students would write programs by placing the instructions on punch cards using a desk-sized keypunch machine,” recalls Lamagna. “One error meant the entire card had to be re-punched.”

Each card could hold only one program statement, so students needed to feed multiple cards into the computer in order. A “deck” of cards formed the program—drop your cards, and you had, catastrophically, “shuffled your deck.”

Above left, cutting-edge 1970s punch card technology. Above, virtual reality—for applications both serious and fun—is one of the burgeoning users of big data. 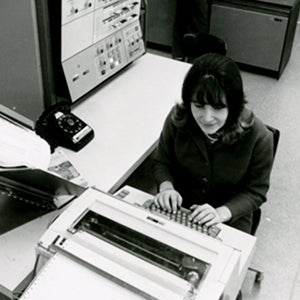 The Computer Workforce Computer programming was originally thought of as women’s work—“it’s just like planning a dinner,” a 1967 Cosmo article assured readers, “you schedule everything so it’s ready when you need it”—and the field was small, restricted to universities and the large corporations that had the money, and space, for a huge mainframe. Women’s participation in computer science nationally has now dropped to 18 percent, according to research from Accenture and Girls Who Code. But the job market is huge and growing. Nationally, there were 500,000 computing job openings in 2015, according to the U.S. Bureau of Labor Statistics, and fewer than 40,000 computer science grads to fill them. In Rhode Island, nearly 1,700 computing jobs go unfilled with average salaries of $90,000, significantly higher than the average state wage of $52,000. Photo above: At the keyboard of URI’s IBM 360, circa 1976.

“A good example of a program that might be assigned in an intro class would be to determine whether a number is a prime,” says Lamagna. “Another might be to take a list of names and sort them alphabetically—this, of course, is something Excel can do for us now.” Toward the end of the semester, computer science majors might be challenged: “We might ask them to take a paragraph and translate it into pig Latin.”

Pig Latin has now fallen out of favor, it’s a lot harder (although still not impossible) to lose all your files, let alone whole programs, and students have hundreds of computer science offerings to choose from. Indeed, computers and their ability to manipulate complex data have become part of almost every area of everyday life, from art to sports and from biomedical research to movie special effects—all of which are reflected in URI course offerings. No surprise, then, that the department now teaches nearly 1,700 students each semester, only 400 of whom are computer science majors. That’s been one of the department’s challenges as it grows, says Professor Joan Peckham, who stepped down this summer as chair—as more students come from different disciplines, seeking complementary majors, minors or certificates to go with pretty much every other course URI offers, professors find themselves teaching students who are less prepared in math and problem solving than traditional computer science majors. Another challenge: the industry is constantly and rapidly evolving, so courses must respond to new techniques and languages.

This September, undergraduate students began enrolling innew programs under the umbrella of the University’s campus-wide Big Data Collaborative. The courses examine everything from the condition of the oceans to health care systems, and from global financial systems to threats to national infrastructure, and they reflect the nearly unfathomable amount of information affecting our lives. For perspective, consider this: IBM estimates that 90 percent of the data in the world today was created in the past two years. In the future, how we control access to that data, and how we apply its lessons, may be hallmarks of a just society.

“We need the natural scientists, social scientists, policy experts, and yes, also the humanities, if we are to make best, and safe, use of the oceans of data in which we all now swim,” says Peckham, who is now coordinating the Big Data Collaborative. “For good examples, read the book Weapons of Math Destruction [by Wall Street analyst Cathy O’Neil], which examines policies that were developed on the heels of data analysis, but did more harm than good. We need to go beyond procuring, cleaning, archiving, accessing, and analyzing data, and inject the knowledge of the domain experts who might be able to help us predict the possible benefits and harms of the actions that follow what we think the data is telling us.”

And as we learn to analyze huge data sets to reveal patterns and associations, there’s one pattern that Lamagna finds hard to ignore. “Big Data is back to the future for URI’s computer science,” he says. “The department’s first chair, Bill Hemmerle, was a computational statistician interested in making sense of data.” •

URI’s computer science department will celebrate its 50th anniversary on October 14, when national speakers will tackle topics such as election hacking. More information at cs.uri.edu.

« The Power of Literature » That’s Cub