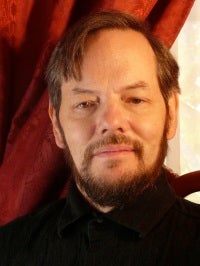 Russell Potter was born and raised in Cleveland Ohio; he attended Goddard College and The Evergreen State College, and earned his Ph.D. in English from Brown University. He’s the author of nonfiction books on topics as varied as the history of Hip-hop and British Arctic exploration, and appeared in “Arctic Passage,” an Emmy-nominated episode of PBS’s NOVA in 2006. His debut novel, PYG: The Memoirs of Toby, the Learned Pig, is based on the career of an actual “learned” pig that toured England in the 1780’s. Toby’s performances consisted of answering questions from the audience by spelling out his answers using cards on which individual letters of the alphabet were written. The pig’s ability to reply to all manner of inquiries amazed all who saw him, prompting the poet Robert Southey to declare him “a far greater object of admiration to the English nation than ever was Sir Isaac Newton.” PYG was originally published in the UK by Canongate Books in 2011, and was published in the US as a paperback original by Penguin Books in August of 2012. He lives in Providence and is Professor of English at Rhode Island College.

"This annual conference is a gift to the community."
"I loved the networking opportunities which will be a source of continued inspiration through others, the dedication and wisdom of staff, workshop and craft session teachers, and keynote speakers."