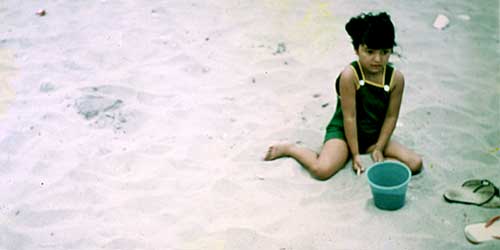 URI is honored to feature Jhumpa Lahiri, Hon. ’01, in two important ways this fall. Interpreter of Maladies, Lahiri’s Pulitzer Prize-winning story collection, was our first Common Reading book for incoming freshmen. And as part of our 2009 Honors Colloquium, the author will read from her latest book, Unaccustomed Earth, in Chafee Auditorium on November 10.

Jhumpa Lahiri grew up in Kingston, R.I., where her father has worked as a URI librarian since 1970. In a QuadAngles phone interview, she reflected on her life, her work, and her connection to the Ocean State.

On themes from Interpreter of Maladies that might resonate with college students:

“Matters of dislocation … being a recent arrival somewhere, as many of my characters are. … For me, college [at Barnard in New York City] was really that experience: for the first time in my life, leaving behind my home, my parents, my family, my day-to-day life with them, and learning to live in another way, more on my own terms.”

On how geography shapes personality and perspective:

“From childhood I always loved the ocean. I felt that being close to the sea is a basic human need. … There’s something so powerful about the element of it, the distinction between the land and the water, the force of the water and what it represents in contrast to the land. … The older I get, the more I just feel frustrated that I don’t have that in my life [in Brooklyn, N.Y.]. Especially for my children now, I wish I could take them to the ocean all the time, I feel that’s where we should be going in summer and spring and autumn and on cold, windy days. It’s such an amazing element of my upbringing. It’s one of the things I hold most dear.”

“I remember a hurricane, I think Belle was the name of it. I remember people going to—is that store still called Benny’s, the hardware store? I remember there being this sort of general low-lying panic, and my parents getting masking tape and putting big X’s on their windows.”

On URI and her father’s work as a URI librarian:

“I always felt that the values that I believed were most important—and that would make the world the best place—existed there. To be educated was the most important thing. So much of the frustration that I felt growing up, that I felt on behalf of my parents, all of the cultural difficulties and misunderstandings, were rooted in ignorance. They almost always are.”

“On a very basic level it was nice to know that there were other people from other countries there. … It just seemed like, OK, well, here is this pocket of Rhode Island that has welcomed our parents and valued them, valued the contributions that they’re making. That was very important to me—that my father went to work there every day, that he had colleagues, that they thought highly of him, that they respected him, that they admired him, that he was part of a greater organization that was doing a very important thing.”

On local R.I. color in her fiction:

In the story “Mrs. Sen’s,” the interviewer suggested, “It gets really Rhode Islandy when they’re …”

“Eating at George’s?” Lahiri finished with a laugh.

Neither the restaurant name George’s nor Galilee, R.I. is mentioned in the text, but those in the know will recognize both when listening to Lahiri read it aloud: