Begun by Charles Fish in 1959, the University of Rhode Island Graduate School of Oceanography (URI GSO) Fish Trawl Survey was established to quantify the seasonal patterns of migratory fish and invertebrates for Narragansett Bay. This bottom-trawl survey has been maintained over time with the leadership of URI GSO’s faculty, with the continued data collection proven invaluable to assessing both seasonal and long-term changes to both the Narragansett Bay and northwest Atlantic ecosystems. With almost 60 years of weekly data collected from a mid-Bay (Fox Island) and an open ocean (Whale Rock) site, the dataset serves as one of the longest continuous records for fish and invertebrate abundances in the world. The Fish Trawl Survey is funded by the University of Rhode Island and the Rhode Island Department of Environmental Management’s Division of Marine Fisheries, both understanding how important it is to maintain the time series data. The Survey has long served as both an educational opportunity for graduate students and the basis for many student’s thesis and dissertation research. Further, government scientists have leaned on this dataset to infer changes in fish populations, and for use as direct input into stock assessment models for many marine species. To learn more about the survey, visit the survey’s home page.

In 2020, scientists at the University of Rhode Island (URI) and the Rhode Island Department of Environmental Management (DEM) launched a long-term monitoring project to study the role of Narragansett Bay kelp ecosystems in shaping ecological dynamics. Specifically, there are two motivating questions for this program: (1) To what extent do kelps impact fish and invertebrate productivity and community assemblages? (2) How will a rapidly changing environment (e.g., water temperatures and nutrients) affect kelps and their associated communities through time? These data will help inform habitat conservation needs and assist in an ecosystem-based fisheries management approach. The program uses standardized underwater visual census methods to be able to compare kelp ecosystems in Rhode Island to other ecosystem engineers being monitored by DEM and partners, including oyster reefs, eelgrass beds, salt marshes, and artificial reefs. Annual sampling via SCUBA is conducted at sites across Narragansett Bay to collect data on benthic composition, fish and invertebrate abundance, kelp density, structural complexity, and kelp blade morphometrics. Temperature loggers are also placed at sites and water samples are taken for nutrient analysis. The program serves as an educational opportunity for students at URI as well as scientists at DEM to engage in field research and will eventually be the basis for many student projects. To learn more about the survey, visit ahumphrieslab.com/kelp-ecosystem-dynamics. 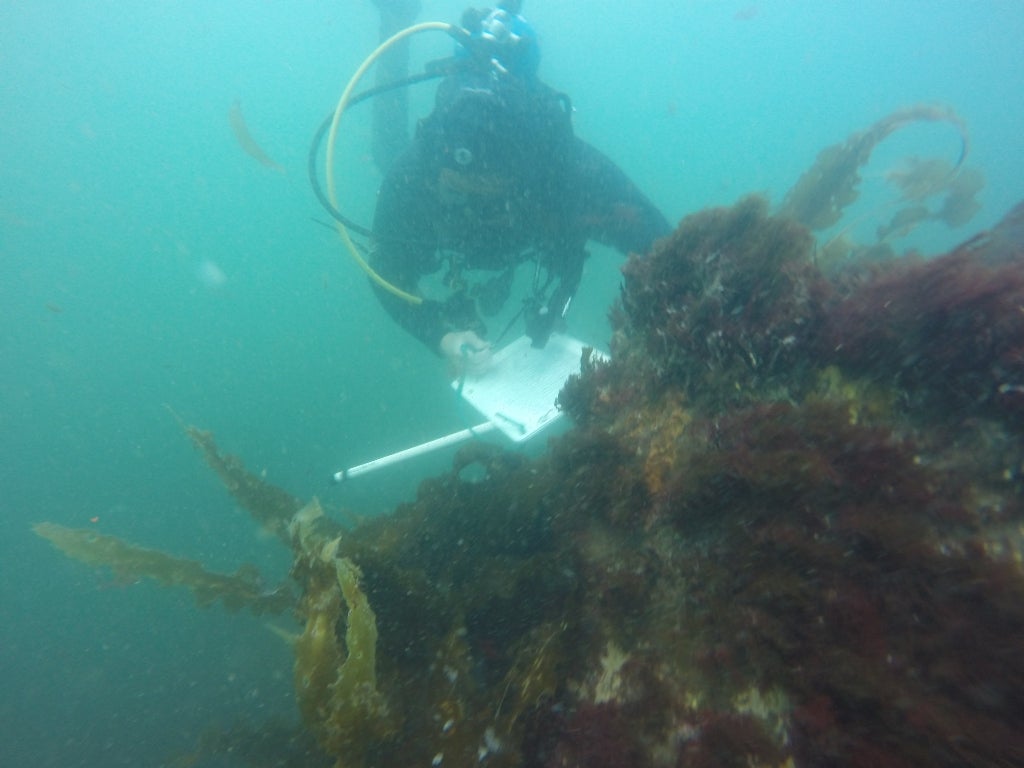