Ecosystem effects on juvenile and larval lobster in Narragansett Bay 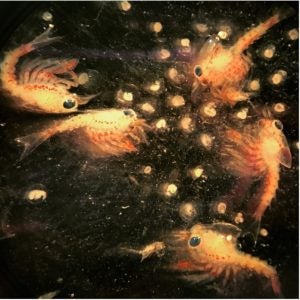 While the lobster fishery in Rhode Island boomed in the late 80s and 90s, it entered a period of decline in the early 2000s. Many credit this decline to the waters in inshore regions of southern New England becoming too hot for lobsters. However, there are several other ecosystem changes that may also be at play in the decline of one of New England’s favorite fisheries. This project, done for Kristin Huizenga’s dissertation, looked at the effect of water temperature on the growth and survival of early juvenile lobsters, the threat of predation from scup and black sea bass, and the presence or absence of lobster larvae in the Narragansett Bay. Through a combination of experiments and field work, the project hopes to bridge the divide between theoretical and real-life effects of a changing ecosystem.

Hard Clam Response to a Warming Environment: A Mesocosm Experiment 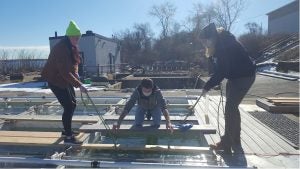 This is a two-year Research project that will be looking at Clams in legacy contaminant laden sediments from the providence river mouth into the bay (year one) and Clams in more pristine Mid bay sediments (year 2). 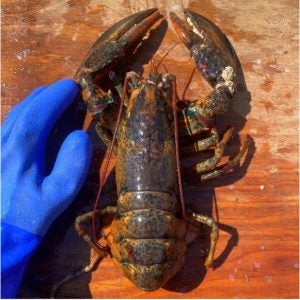 Description: Appearing in the late 1990s, epizootic shell disease (ESD) continues to affect up to 40% of lobster in Southern New England. Appearing as crusted, scab-like lesions, the disease can cause death, decreased growth, and premature molting. Because they are so unsightly, diseased lobsters are also much less valuable to the fishery. Imagine you order the lobster special only to receive a scabby crustacean! Would you pay top dollar?

This study uses a cohort of 36 juvenile lobster to investigate the effects of disease in lobster bioenergetics. Mounting an immune response takes energy, and we want to know where this energy is coming from. Each month, both healthy and diseased lobsters from the cohort are subject to a round of experiments at a predetermined temperature. The energy pathways that are measured include consumption, growth, fecal waste, nitrogenous waste, and oxygen consumption. The various energy pathways can be converted to a common unit such as calories, in an effort to reveal differences between healthy and diseased lobster. 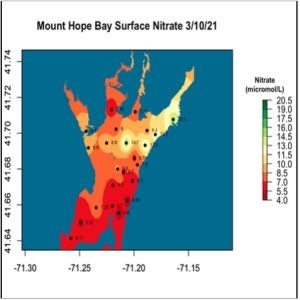 A SNEP grant funded project partnering with MassDEP to monitor water quality in Mt Hope Bay. Two continuous water quality monitoring stations equipped with YSI and SUNA nitrate sensors at the mouth of the Cole River and Taunton River. In addition, spatial surveys are to be conducted 4 times a year (2021-2022) to the spatial extent of hypoxia events and the spatial distribution of nitrate within Mt Hope Bay.

Other project data availability: QA/QC Data for this project is available through the MassDEP website. https://www.mass.gov/info-details/mount-hope-bay-marine-buoy-continuous-probe-data