MERL has produced a variety of datasets since our founding in 1976, some of which continue to this day. Our data has also been referenced in numerous scholarly works, and can be accessed below. 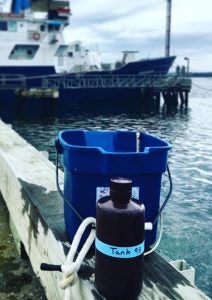 Water samples are collected on a weekly basis, on either Wednesday or Thursday. Samples are taken from the surface waters adjacent to the GSO dock between 9 and 10 a.m.

Chlorophyll concentrations, fluorescence, nutrient (SiO4, NO3, NO2, NH4, and PO4) concentrations, temperature, and salinity are measured for each sample. The data has been collected since 1976, originally from the MERL headtank, and is referred to as “Tank-98” data.

Please note that there are some differences in the types of measurements taken throughout the dataset. 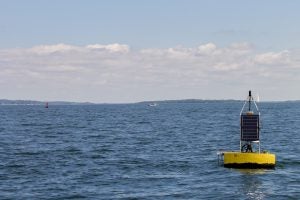 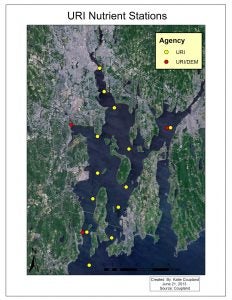 Alkalinity samples are taken twice a month from June to August. These samples are analyzed within 24 hours of sample collection. This dataset dates back to 2012. Sample stations are surface and bottom of the following locations based on NBFSMN Map: B4, B3, B2, B14, F5, B6, B7, F7, B13, and B12.

Samples of benthic macrofauna are collected at four sites in Narragansett Bay, RI during June of each year. The sites are located at the north end of Conanicut Island (North Jamestown), at the mouth of Greenwich Bay, off Conimicut Point, and in Mt. Hope Bay. Location data for each of the four stations can be downloaded here: Benthos_Stn_locations (.xls)

Sampling: At each site, 15 replicate cores were hand collected by scuba divers. The core tubes were made of acrylic and measured 30 cm in length and 3.4 cm in diameter. The cores were inserted approximately 15 cm into the sediment and closed at each end with a rubber stopper.

Processing: The top 2 cm of sediment was removed along with any trapped overlying water to analyze separately from the remaining 8 cm. A sub-sample of the 0–2 cm portion was also taken using a 1.2 cm core for enumeration of meiofaunal populations. The samples were preserved in 10% buffered formalin and stained with Rose Bengal dye.

Counting: Each macrofaunal sample was rinsed through stacked 500 and 300 μm sieves. The meiofaunal samples were rinsed through a 37 μm sieve. Organisms retained on the sieves were identified to species level and enumerated. Reference information for the identification of common benthic fauna found in Narragansett Bay may be downloaded here: Benthos_id_sources (.pdf). Abundances were converted to numbers per square meter by taking the mean abundance of the 15 replicates and multiplying by 1 m²/core area. Data, organized by the year that samples were collected, are available to download below. Please note: there is no data available for 2003 and during 2005, only the North Jamestown station was sampled. Analysis of the samples collected in June of 2006 is currently underway.

The following data are in Microsoft Excel Spreadsheet format. Right click and select “Save target as.”