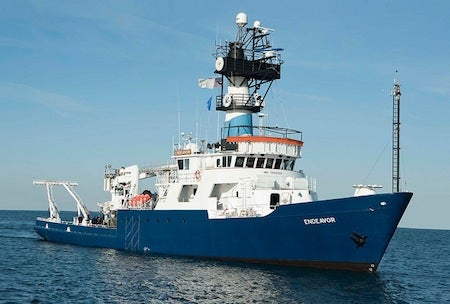 The University of Rhode Island’s research vessel Endeavor has carried scientists, students and teachers throughout the world’s oceans to conduct scientific research since its christening 40 years ago.

Now it’s the public’s turn to glimpse the ship.

URI’s Graduate School of Oceanography will offer tours of the vessel from 10 a.m. to 4 p.m. Saturday, Sept. 10 at the Narragansett Bay Campus, 215 South Ferry Road in Narragansett.

The tours are free and open to all with one caveat: shoes with flat soles and closed toes and closed heels are required.

GSO is hosting the event—an all-day open house on the ship that also includes tents near the dock with a sea-life touch tank for kids, science exhibits about marine life and the oceans, and activities for children. Food will be available on site, at a cost, from Dels Frozen Lemonade, Roch’s Fresh Foods, Acacia Cafe, and Eddie’s BBQ.

The exhibits are sure to pique the interest of budding scientists, as well as college students. GSO faculty, graduate students and staff will offer information about rocks from the ocean floor, pollutants in the oceans and everyday life, zooplankton, hurricanes, sharks, oyster aquaculture, scuba diving and deep-sea ocean exploration.

Guests can park their cars on the Bay Campus for free and take a short walk to the pier where the ship is docked. Shuttle vans will be available, if needed. During the tour, GSO scientists will take visitors to the ship’s laboratories, galley, bridge and staterooms.

Along the way, visitors should get details like how much food is necessary for a two-week cruise: 12 pounds of provolone cheese, 240 cans of soda, 58 gallons of milk, 30 loaves of bread, a case of Oreo cookies, 40 pounds of hamburger, and 25 pounds of canned tuna. And that’s just a few of the provisions.

“There will be plenty of things for the entire family to see and do, including lots of hands-on activities,’’ says Frank Baker, with GSO’s Office of Marine Programs. “We encourage families to spend the day with us—and learn about one of the biggest assets of our state: the ocean.’’

Built by Peterson Builders in Sturgeon Bay, Wis., the steel-hulled ship is a 185-foot research vessel with a crew of 12 and accommodations for 17 scientists and one marine technician. Endeavor is operated by GSO on behalf of the National Science Foundation.

It was christened on a chilly day in December 1976 at a joyous celebration attended by state dignitaries, including the late Nuala Pell, who honored the ship with the traditional breaking of a bottle of champagne across the hull.

Since then, it has taken thousands of scientists, students, and educators from URI and throughout the nation on more than 580 expeditions throughout the Atlantic and Pacific Oceans, to the Mediterranean and Black Seas, and even to the Arctic.

Endeavor spends about 200 days each year at sea and serves as Rhode Island’s ocean-going ambassador in ports of call in the United States and abroad. Its home port is the GSO campus.

There have been many memorable cruises over the years:

* On its first operational cruise, the Endeavor responded to the M/V Argo Merchant oil spill near Nantucket in December 1976. Thirty four years later, the ship would be on scene in the Gulf of Mexico assessing environmental impacts after the Deepwater Horizon oil spill.

* In 2009, the vessel went on a 4½ month cruise to Florida, Brazil, Namibia and Cape Verde, studying everything from the operations of autonomous underwater vehicles to the Kane Megamullion, a geologic feature on the mid-Atlantic ridge.

* In 2010, the vessel conducted a 14-day scientific survey of the seafloor off the coast of Port-au-Prince Haiti to seek geologic evidence of the earthquake that struck the region. The ship also delivered dozens of large tents collected by the Warwick-based nonprofit, Plan USA.

* In 2014, URI undergraduate students studied ocean ecology at the edge of the continental shelf by examining creatures living in the open ocean, including gulper eels whose jawbones are 10 times the length of their skull.

* This year, Endeavor traveled to Georges Bank to study ocean currents and test a new marine instrument that uses long-range underwater acoustic transmissions to track the movements of fish during long periods.

Endeavor is also used to give teachers an opportunity to do marine science research on the ocean, alongside GSO professors. Through the Rhode Island Teacher-at-Sea Program, dozens of teachers have participated in cruises, bringing what they learned back to the classroom.

“A lot of people don’t realize that Endeavor is also a wonderful teaching tool for our local educators,’’ says Baker. “Our teachers have a unique opportunity to do science at sea, thanks to this remarkable ship.’’

Endeavor is the first in the nation’s “academic fleet’’ to convert its propulsion system to burn 5 percent refined bio-diesel, with plans to increase to 20 percent in the future.

The vessel leads the way for “greening of the fleet’’ with upgrades to more efficient lighting, main engine and auxiliary generators, among other things, making it one of the more earth-friendly academic research vessels in the country.

“We are proud of Endeavor and the men and women who have served as crew for the last 40 years,’’ says Thomas Glennon, director of Marine Operations at GSO. “GSO is fortunate to host this magnificent vessel in our backyard. We hope many Rhode Islanders will take this opportunity to join us in the celebration.’’